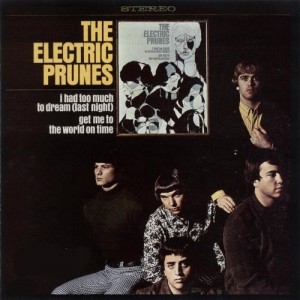 A hundred albums in, and one of the things that bothers me is that, James Brown aside, every album has escaped a bad or even mediocre review. I suppose on the one hand these are THE 1001 albums, so there’s some quality control going on, but if I’m gushing about every entry in the book, it’s going to be a bit tedious, and not exactly selling my critical skill.

Lucky for me then to stumble on The Electric Prunes. Now, as you may have spotted from my reviews of The Sonics and The Monks way back, I’m quite the fan of sixties garage rock and all the proto-punk shenanigans within. Add to that the fact that my earliest encounter with these guys was my dad sending me into town with a tenner in my pocket to see if they had anything still available in HMV (I got confused and brought home a Virgin Prunes album instead). So even though I’d never listened to them, I remember my old man gushing about them and came at this expecting something exciting and game-changing, even in a year where the game was changing pretty damn regularly anyway.

It kicks off with the title track, which does start with a heart-pumping tremolo intro that sounds thoroughly space age and mixes psychedelia with a hard tempo. It sounds not just like a basement track, but one from a basement the size of the downstairs bog, cramped, echoing and muffled. That said, it’s a catchy number.

“Bangles” and the strangely out-of-place “Onie” let things down a bit,  jumping out as pretty unremarkable, and the follow-up tracks don’t do much to get the energy pumping.

It picks up a bit for “Sold to the highest bidder”, which kicks off with a Dick Dale-esque guitar riff that hits you like a 747 in the nadgers, but even that gets bland after a couple of minutes in. The only other real high point on this is the second single, the exciting “Get me to the world on time”. It’s a pop number, but it’s worthy of what the Stones were putting out in 1964, and there’s certain moments where James Lowe’s vocal break into a hard-rocking scream that sounds to modern ears like their legacy of MC5 and The Ramones beckoning.

“About a Quarter to Nine” is soft and laid back with a nifty swing background making it interesting, and while “The King is in the Counting House” leans on the same medieaval bollocks that cursed Jagger, Tim Buckley and others, it is slightly charming too.

“Luvin’” is a proper R&B track with some clever reverb to keep you paying attention, and “Try me on for size” keeps that blues feeling going, bright and chaotic. Jagger would be jealous.

It all ends with a knowing wink with “The Toonerville Trolley”, mixing music hall with a punk sneer, which at least stands out as memorable.

It’s not a BAD album, but even after coming at it for the first time properly moist-gusseted and giving it a few proper optimistic listens since, it’s not one that I can really get into, and there’s no solid gold tracks to clutter up my playlists. Maybe they paved the way for the likes of MC5 to really reach new territory, and maybe this album deserves its recognition for its influence on the likes of The Stooges years later, but, to be honest, meh…

Oh, by the way, I discovered last week my Dad was getting them confused with Vanilla Fudge anyway.