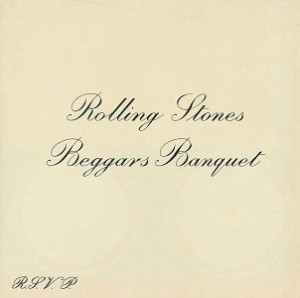 In the days when I was just discovering the Stones, my first album (nicked from the old man) was the superb Hot Rocks collection. It divided neatly between their R&B to psychedelia days on Disc 1, and then Disc 2 was when “Street Fightin’ Man” kicked in and the golden period began, the bit that really caught my attention.

That golden period, the five years or so between this album and “Exile on Main Street”, is what truly elevated the already kind-of-deified Rolling Stones to greatness, and this was the album that kicked it off.

“Sympathy for the Devil” to me is THE Rolling Stones track, full of pomp, their Satanic Majesties sneering into the samba rhythm and dark imagery that wasn’t just poetic but captured the time perfectly (the “Who killed the Kennedy’s” line was changed half way through recording following Bobby’s assassination). It’s a storming start to the album (trivia bit: Marianne Faithfull did some of the ‘woo woo’ backing vocals).

What follows, to me though, doesn’t often capture the imagination like that first song. Jagger and co had started to lean away from the psychedelia of “Aftermath” towards a country rock sound. “No Expectations” gets the album moving and is quite charming in and of itself – it’s also notable for being one of Brian Jones’s last appearances with the boys, with some lovely slide guitar.

“Dear Doctor” reaches back to proper Honky Tonk blues, while “Parachute woman” probably comes closest to their earlier stuff. “Jigsaw Blues” feels quite original (in as much as a retro blues track can be), and by the time we’re into Side B, with those oh-so-familiar chords that kick off “Street Fighting Man”, it’s clear that the boys have taken a radically new direction into classic country rock.

The rest of side B is where it all gets a bit blurred, and while the double whammy of “Factory Girl” and “Salt of the Earth” brings it all into shape by the end, you still can’t help feeling like it all fizzled out.

No worries, because as we all know they were soon going to led it bleed while getting their sticky fingers exiled from Main Street, so if ever there was a calm before the storm, “Beggars Banquet” was it.