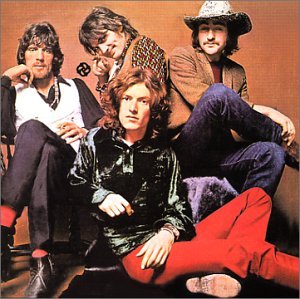 If rock and roll is an American invention, if even Britain’s greatest ambassadors got their careers started doing covers of the Isley Brothers and Chuck Berry, then there was still a part of the rock chronicle that was uniquely British in its heritage and temperament. The Kinks got it, as did The Who, and as The Beatles progressed their sound flew the Union Jack more and more. Traffic though, integrated the traditional sounds of British folk into true rock stylings.

You can hear it on the opener “You can all join in” as well as “Vagabond Virgin” – there’s a real flair of Merrie Old England in each. It all gets slightly more conventional for the likes of “Feelin’ Alright” and “No Time To Love”, but this is a distinctly traditional English album.

Which leaves the question, is it any good? Well the opening tracks, “You Can All Join In” and “Pearly Queen” stand out as original and interesting, and there’s no properly duff tracks here. They had Steve Winwood on board, fresh from The Spencer Davis Group, and he plays with confidence and energy. But still, this album felt flat to me – there weren’t any tracks that got me excited and dragging into playlists. Perfectly tolerable mind.

Oh, and try not to listen too closely to the lyrics of “Vagabond Virgin” – Operation Yewtree anyone?