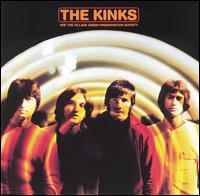 It’s strange how many albums I listen to on this list where you hear them described as “it barely sold on its first release but now it’s recognised as a classic”. Maybe there’s some deeper truth in there – that the works that really change the industry, really stand out, may by definition not be commercially appealing, or maybe they’re just not suited to their time.

Either way, when I get an album like this one and I’m told it flopped, I can’t help thinking “idiots”.

“The Kinks are the Village Green Preservation Society” is basically recognised these days as THE Kinks album, their finest hour. And while (title track aside) it’s not as rich in singles as “Something Else”, as a testament to the Davies songbook and The Kinks’ unique outlook on British culture in the sixties, it is remarkable.

The Kinks (and particularly Ray Davies) were always good at sentiment and nostalgia, and the central theme, so neatly encapsulated in that title track, is a look back lamenting the dusk of country life and ‘old’ England that never really was. In fact in many places it’s an album with a tinge of regret (“Do you remember Walter?” and “Village Green” jump out as examples). It’s imaginative musically, and I love the seemingly misplaced bluesy intro to “Last of the Steam Powered Trains”.

This is an album of careful, loving songwriting (it’s been described as feeling like a Ray Davies solo album) and in its finest moments it evokes the stoic contemplation of earlier songs like “Waterloo Sunset” and “Days”. It never slips (although “Wicked Anabella” doesn’t really fit the mood), and it’s an album that stands up to repeated listenings with more to discover each time.