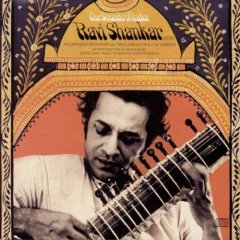 One of my favourite albums (sadly not in this list), is Ray Davies’ “The Storyteller”. On top of the fact that, well, it’s Ray Davies, he spends the album narrating to the small devoted crowd as he plays old Kinks tunes. While I suppose Ray Davies could make a brilliant album with nothing but bad flatulence and a funnel, it is captivating in terms of the fact that you’re enjoying not just the music but the artist behind it, letting you into the artistry of what he’s creating.

It’s part of the treat you get with this album. By 1968 the impact of Indian music was firmly planted in the west. The Beatles were hanging out with Shankar and George in particular was getting his beard on. And yet still, there was a whole universe of music that was poorly understood to Western ears, beyond throwing a bit of sitar into rock tunes.

What Ravi Shankar does with this album is create an introduction, what could almost be described as a lecture, in which he, Chatur Lal and N.C. Mullik take us through four ragas that explore classical Indian music’s motifs with care and precision.

Like “Call of the Valley” a few months before, this was an album that always fit a specific niche, but even for more cynical ears, there’s a lot of brilliant musicianship here, and a lot of love too. So yes, while to modern Western ears it may sound like the music from the local curry house, you still could do a lot worse than sit back with your takeaway bhuna and a beer, close your eyes and immerse yourself in this rich tapestry of music.