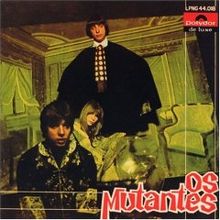 I listen to some weird shit on here.

It wasn’t too long before that Brazil was the musical home of sexy bossa nova, but by 1968 things had started to get messy. While for the outside world it was all great football and hot ladies on beaches, the truth was that Castelo Branco’s military dictatorship was fast turning the place into a shithole, with flagrant human rights abuses and all dissent brutally crushed.

Still, despite the wrath of the jackboots, the hippie revolution did start to emerge, and the Tropicália artistic movement, led by Gilberto Gil and Caetano Veloso, did start to cannibalise traditional Brazillian rhythms into something more avant-garde and politically dissident.

Enter Os Mutantes, with what is a mind-blowingly experimental and sonically intense album, even in these enlightened days. Don’t believe me? Well, the opening track, “Panis et Circenses” kicks off with a gentle folk melody that almost seems dull, and then suddenly at two minutes you hear the record slow down and stop before suddenly bursting back to life. And then they go off for a coffee break at the end. Those wacky hippies…

The follow-up track, “A Minha Menina”, bursts in with some distorted guitar chords that can only be described as righteous, and this is where you really get the Tropicália zeitgeist, with traditional rhythms chopped up and rewritten for the rock crowd. From then on it mixes genres and sounds, and on the amazingly disparate “Trem Fastama” it’s only the charming intenseness of it all that keeps it together. They’re nice enough to throw in a cover of “Once was a time I thought” by The Mamas and the Papas (“Tempo no Tempo”) for a gentle comedown, before closer “Ave Gengis Khan” rocks you out one more time.

It’s a safe bet that 40 per cent of listeners to this album will think “what the fuck?” before clicking shuffle fast. Still, it’s a remarkable album, not just as a sonic belter but as a memento of when rock and roll really tried to fight the power.