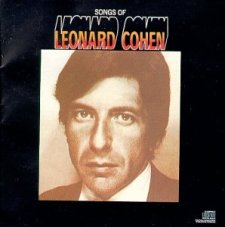 “Give me Leonard Cohen afterworld, so I can sigh eternally”
– Kurt Cobain, Penny Royal Tea

Leonard Cohen has become such a symbol not just of singer-songwriting but amniotic melancholy that it’s hard to imagine him as a debuting artist. Already a successful novelist and poet before he set foot in a studio, his flat vocal range seems like it would have been a strange sell to the exuberant mood of 1968, and yet it was a big hit, and beckoned the start of a long and admired career.

The big secret of course is, that despite the gloom that he’s known for, his lyrics are actually full of dry humour, tender romance and invention, and on this, his debut, they’re all crammed into a fierce 38 minutes. The opener, and one of his most famous tracks, “Suzanne” was written about Cohen’s platonic relationship with Suzanne Verdal, and was first released as a poem on his 1966 book “Parasites of Heaven”. Though the relationship was platonic, it’s as tender as any love song as any ever written – “she gets you on her wavelength and lets the river answer that you’ve always been her lover” – and as you immerse into it, you’re reminded of that bittersweet part of falling in love where you find yourself lost, intoxicated in them. It’s a beautiful, gorgeous track.

What follows is rich and dark, with tracks like “Master Song” and “Winter Lady” once again enveloping you with minimalist guitar and that gentle voice. The mood only starts to change with “Sisters of Mercy”, a drifting story of a love triangle, and you feel like a journey has begun, that you’re sailing away with the song as it plays (can you tell I’m listening to this on headphones by the way?)

“So Long Marianne” is once again more uplifting, with a chorus that’s actually kind of catchy, and that slightly brighter sound carries on for side 2, with “Stories of the Street” being a romantic highlight. “Teachers” is perhaps musically the boldest track, with a spanish guitar powering throughout, and it’s in stark contrast to closer “One of us cannot be wrong” which is back to the darker mood that started the album, and is notable for the bizarrely out-of-tune backing vocal that kicks in 3:26. Very strange.

Still, it shouldn’t distract from the effect of this album. Joke all you like about Leonard Cohen being a byword for misery, but I can imagine “The Songs of Leonard Cohen” being a comfort for the broken-hearted. What sounds like gloom is just intimacy, and it’s an album you’ll want to let wander into your mind for comfort when you’re in the dark.