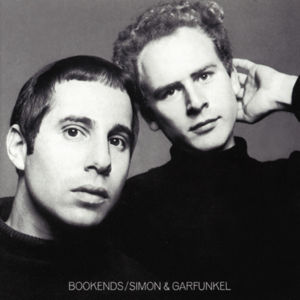 It sort of faded as they got more confident, and thankfully it’s pretty much absent by “Bridge Over Troubled Water”, but despite all the charming melody and gorgeous songwriting that Simon and Garfunkel are known for, they always had this slightly annoying over-introspective arty pretension about them as well.

It’s the reason that “Wednesday Morning 3 AM” isn’t much fun, why a lot of the space between the title track and “I am a Rock” on “Sounds of Silence” drags, and why even the charming “Parsley, Sage, Rosemary and Thyme” has cringey bits like “The Dangling Conversation”.

It’s also the minor flaw that’s achingly present in this album, at least on Side A, and that’s a shame because “Bookends” is really a wonderful album. It’s certainly the warmest one they’ve done, and it’s also their most cerebral.

From the starting intro of “Bookends Theme” that gives way quickly to “Save the Life of my Child”, it feels (even more than usual) like a showpiece for Paul Simon’s songwriting, and while the latter track feels slightly out of place from the rest of the album, it certainly grabs your attention with its upbeat intro. It’s kind of comical lyrically, but it’s smart too. It was a guilty pleasure to hear the chorus from “The Sound of Silence” subtly hidden in the backing vocals too (never noticed that before).

“America” is a triumphant, magnificent song. Reminiscent of “Homeward Bound”, it narrates a couple travelling across the country, sharing playful conversation that gives way to introspection and sadness. If there was ever a song that made me want to nip into the travel agents though, this would be it (apart from “Club Tropicana” obviously). There’s such romance here that you yearn for just a slice of it. Or, as my favourite sequence from the wonderful “Almost Famous” goes…

“Overs” is unremarkable if gentle, and “Voices of Old People” pushes the event horizon of pretension (as well as being annoyingly muted), but when it moves into the beautiful “Old Friends” it kind of redeems itself.

The return of “Bookends Theme” resets the mood, which carries through on “Faking it”, which gently closes Side A.

Side B is, of course, where the fun begins, and it’s playful, raucous, iconic and childlike by turn of its four tracks. “Punky’s Dilemma” is great in its cheerful surrealism, and for me will always be linked to my memory of a close friend giggling at the “I wish I was a Kellogg’s Corn Flake” lyric.

“Mrs Robinson” of course needs no introduction. It’s a song that never fails for me, although it was depressing to learn that Joe Di Maggio always felt insulted by the reference to him, when it clearly wasn’t meant that way. Never liked the Lemonheads cover by the way – Evan Dando was clearly having a lazy day there.

We were all young and naive once, so I hope you’ll forgive me that my first introduction to “A Hazy Shade of Winter” was via The Bangles’ cover. Actually, despite its poppiness, that’s a pretty good cover for a song that I’ve always enjoyed. Possibly the duo’s ‘rockiest’ song, it’s fun, exhilarating and would make a great closer, if not for the mischievous “At the Zoo”. I’ve heard that song described as “childlike” and “Orwellian”, a strange combination of definitions. It’s certainly smarter than it seems at first glance, but it’s still warm and cheeky, and a great ‘wink to the camera’ ending for a wonderfully crafted album.

Love that album cover too.

PS. One eighth of the way through!