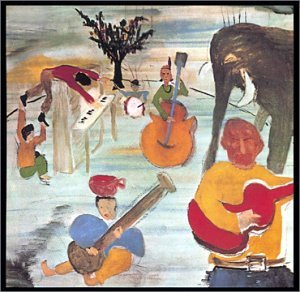 “That one record changed everything for me. After Sgt. Pepper, it’s the most influential record in the history of rock and roll. It affected Pink Floyd deeply, deeply, deeply. Philosophically, other albums may have been more important, like Lennon’s first solo album. But sonically, the way the record’s constructed, I think Music from Big Pink is fundamental to everything that happened after it.”

Considering it’s a debut album, and a debut album from a bigger artists’ backing band at that, “Music from Big Pink” had a big impact on music. A good listen of it spurned Eric Clapton to disband Cream and go for a new sound, while Roger Waters didn’t exactly mess about with his review.

Discovering it for the first time 46 years after its release, it’s initially hard to see the significance of it – the first listen gives you an impression of an above average country-rock album with nothing particularly special about it. It’s only when you start thinking about what it was doing, in what was a crazy age of electronica and psychedelia, that you start to understand its importance.

The big thing about this album is its honesty. It pretty much starts off as an extended jam session (with “Tears of Rage” being a stunningly emotional opener with more soul than James Brown’s shoe collection*), but settles down into warm country-rock numbers like “In a Station” and album highlight “The Weight”. There’s interesting moments like a deconstructed cover of Johnny Cash’s favourite “Long Black Veil” and the fired-up “Wheels on Fire” (stop thinking about ‘Ab Fab’), plus subtle touches of R&B and soul here and there, but the main thing to take away from this album is the lack of clever post-production and special effects – this is an album of four guys sat around with guitars and drums, playing music from the heart.

Which is maybe the point. After all, The Band were seasoned musicians who’d already put the meat on the bone for Bob Dylan’s big efforts, and here they are forgoing psychedelia, proto-metal and space rock, nestling down into heartelt songs and exploring the American roots that birthed Rock n’ Roll. Was it the red line that started to bring psychedelia to a close? Was it the start of a new maturity for the baby boomers’ musical revolution. Perhaps.

But really it’s a rich, calm and professional album and the start of a long career from a band that was forging its own identity out of being just ‘the backing band’. Which I guess is something only The Shadows had done at that point.

* This joke is funnier if you say it out loud.