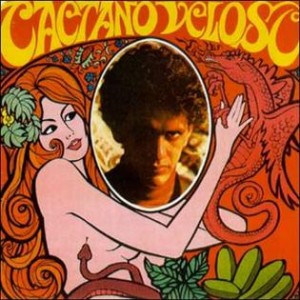 Discussing with a colleague the other day, we thought of the idea of music as a revolutionary force with pretty cynical eyes. Is it really a mature response to consider sweeping cultural change as inspired by music? Was Bob Dylan a leader or a troubadour? Is Pussy Riot’s defiance of government a true catalyst for change?

To quote, “‘Blonde on Blonde’ didn’t change the world. Change was happening, it just happened to have a soundtrack”.

How well Caetano Veloso fits into the argument is grey though. When we talk about Brazil in 1968, we’re talking about art defying a very real totalitarian government. And yet, still, Caetano Veloso was arguably the leading light of Brazil’s rebellious Tropicalia art movement that spawned the likes of Os Mutantes.

He’s been described (not least by “1001 albums…”) as a hybrid of Brian Wilson, Stevie Wonder, Bob Dylan, Syd Barrett, John Lennon and Bob Marley. All of which makes me wonder did I miss a meeting?

Don’t get me wrong, Caetano Veloso is quite an artist. This album feels like a step forward in the bossa nova sound to something quite new. There’s touches of west coast psychedelia here, interspersed with gentle mellow melodies and a charismatic (if soft-spoken) voice, but given how much “Os Mutantes” rocked my world, I was expecting something a little more edgy.

This, to me, doesn’t feel like a revolutionary album. Veloso was a political dissident before too long, and his career continues to this day, but when it comes to Viva La Revolución, I’ll stick to Rage against the Machine ta.