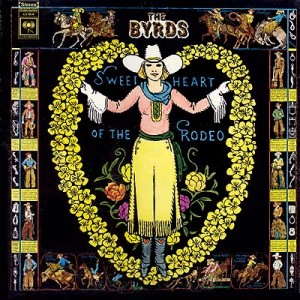 I’m not going to do it this time. Honest I’m not. Last time I reviewed a Byrds album I went on and on about how they had five albums in this book (more than Pink Floyd or The Smiths) and how I just wasn’t getting it. This time though, it’s the last one. Once this review is over, that’s it. Just a lot of Crosby, Stills and Nash instead. Someone in their editorial team had a real hardon for these guys.

Of course, since their first album, “Mr Tambourine Man”, the line-up of The Byrds had changed relentlessly, and by the time “Sweetheart of the Rodeo” came around, only Roger McGuinn remained from the original group. Which kind of makes sense really, given that “Sweetheart of the Rodeo” is a different beast all together. Gram Parsons, who had joined the band only a few months before recording, had steered the group towards making a country-themed album, and although he was to leave not long afterwards, that’s what he got.

This is, unequivocally, a country album. From the opening track, a cover of Bob Dylan’s “You ain’t going nowhere” (and where would The Byrds be without Dylan covers?), through a host of country favourites, including The Louvin Brothers’ charming ‘The Christian Life”, the emotive “You don’t miss your water” and the powerful Woody Guthrie classic “Pretty Boy Floyd”, that Nashville sound is constant. It’s only later on tracks like the Gram Parsons-penned “Hickory Wind” that you’re actually reminded who’s playing these tunes with a touch of the guitar sound we know so well.

The Nashville scene hated it of course, and the band got a harsh reception when they played there, but it’s seen more now as a warm tribute to the genre.

There’s debate on whether this album was the start of country rock (although Gram Parsons’ “Safe at Home” really should take the title). There’s even some suggestion that the 90s alt-country genre was inspired right here. Really, this is a warm-hearted album that’s more accessible than “The Notorious Byrd Brothers” and has moments of warm charm, but rarely raises its head above being defined as ‘a pretty good country album’. Not remarkable, not genre-shattering, but not bad either.