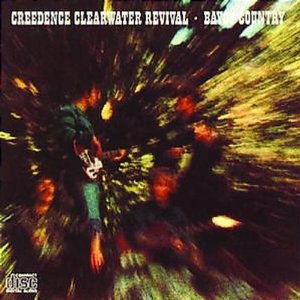 Creedence Clearwater Revival were cool. 1969 was a time for a lot of country and roots rock to raise its dreary head now that the hippies had given up their fucking in the bushes and started getting baked and going to craft fairs. And it’s arguable that CCR were part of the same trend, but still, like I say… Creedence were cool.

Classics like “Fortunate Son” and “Bad Moon Rising” were still a while away, but on this, their second album, they at least hit the ground running after their patchy debut. The opener, “Born on the Bayou” sets the scene, full of Mississippi blues and shiny guitar, and for the rest of Side A, that mood keeps going, with the epic “Graveyard Train” standing out as a swampy delight.

The interesting stuff happens on Side B, with a storming cover of “Good Golly Miss Molly” and the original “Proud Mary” making this a landmark and (in the latter case) establishing John Fogerty as a grand songwriter. Ike and Tina really made that song shine later, but the version on here is rich and exciting to listen to. By the time it finishes off with a grand riff-fest on “Keep on Chooglin'”, you’re hooked, and it’s nice to know here in the future that their best was yet to come.

Oh, and apparently one of the previous incarnations of Creedence Clearwater Revival was “The Golliwogs”, before they were broken up by Fogerty’s stint of national service. Small mercies…