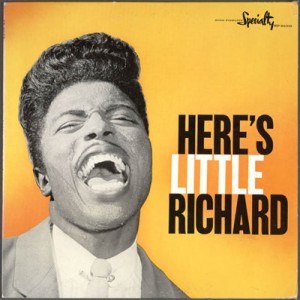 It’s kind of hard to really get a picture of just what Little Richard must have been for mainstream listeners back in ’57. What had come before in the fast-gestating world of rock n’ roll had its moments, but this guy, black, gay, screaming in flamboyant anarchy and leaping across the vinyl with insane energy, this was surely hard to comprehend.

This is an album that oozes iconic songs like “Long Tall Sally”, “Ready Teddy” and “Tutti Frutti”. It never relents for a second, it reminds you how he became a part of our culture, why John Lennon covered him over and over on his “Rock n’ Roll” album, and why what got put on wax here were the zygotes of modern rock music.