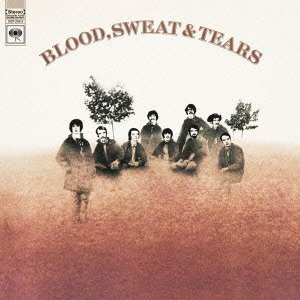 There’s a bit at the beginning of the new Captain America movie where a fellow vet tells Steve Rogers, who’s still getting to grips with his 70-year hibernation, to listen to Marvin Gaye’s “Trouble Man” soundtrack, saying it’ll tell him everything he needs to know. I’d probably have substituted it with “Blood, Sweat and Tears”, because, well, you don’t get big band-soul-psychedelic-rock-funk-blues-jazz albums all that often, and if you’re trying to put the pieces together between Glenn Miller and Skrillex, this is a pretty good place to start.

Is it better for being so diverse? Well yes and no. It kicks off (and closes) with an epic acid-tinged visit to Erik Satie’s “Variations on a Theme”, before diving into a peppery cover of Steve Winwood’s “Smiling Phases” that sounds like a particularly good day for the Spencer Davis Group with an interlude of Miles Davis wedged in the middle. “Sometimes in Winter” plods along nicely, but has a brief flirtation with brass band wankery that’s strangely reminiscent of “Atom Heart Mother” (or maybe that’s just me being a Floyd geek). The energy comes back for the next few tracks, like proper funker “More and More”, which sounds like concentrated Edwin Starr. The Laura Nyro (yes, Laura Nyro) cover “And When I Die” is likable, and Billie Holliday cover “God Bless the Child” is a big jazz number with blues in its soul, although its Ray Charles sound sometimes gets a bit big for its boots.

Side B kicks off with original track “Spinning Wheel”, which is so full of soul and charm that you wonder why they’ve put so much focus on cover versions on this album, but then when they follow up with a big bold take on Berry Gordy’s storming “You made me so very happy” you’re inclined to let them off. But it’s the epic Hammond organ-fest instrumental  that is “Blues Part 2” that’s the highlight of this album; it’s gorgeously indulgent jazz fusion with notes of psychedelia in it, and when you get that seminal riff from “Sunshine of your Love” at about 8 minutes you feel like you’re just being spoiled. It’s blues, it’s rock, it’s jazz, it’s Charles Mingus and Solomon Burke and Syd Barrett and Jimi Hendrix and James Brown all wrapped up in one big orgy of cool.