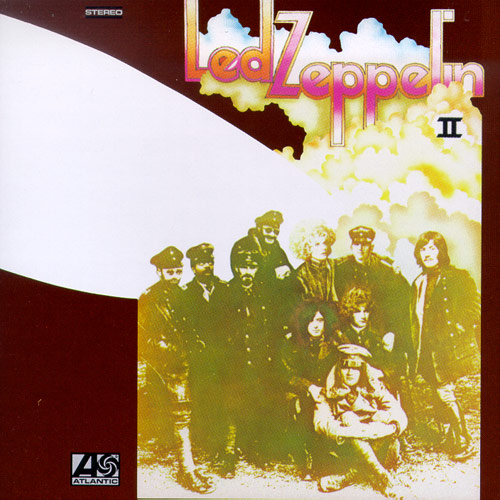 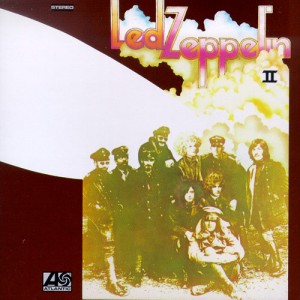 Discovering these albums 25 years later, as I did, it’s easy to miss out on the timescales of how they came out. I’ve always loved “Led Zeppelin II”, but taking in the fact that it came out just a few short months after their debut gives it a great big heap of new gravitas.

Opening up with one of the greatest rock tracks of all time, the shit-the-bed awesome “Whole Lotta Love” sets the bar pretty high, but there’s plenty on here to illustrate that this album didn’t just match its predecessor but totally reimagined what Led Zep was, moving away from their Yardbird/blues roots into something entirely new.

“Whole Lotta Love”, of course, is the bollocks. From that instantly recognisable opening riff, it builds up from a standard rock blast into a chorus with Plant’s howling vocals until, by the second verse, it becomes a cannonball of noise and energy, before kicking in with a unique jazz break of theremin, distortion and Plant’s screaming. As their audio engineer Eddie Kramer said, “The famous Whole Lotta Love mix, where everything is going bananas, is a combination of Jimmy and myself just flying around on a small console twiddling every knob known to man”. When the gorgeous riff kicks back in it’s like an orgasm of pure honey.

By contrast, “What is and Should Never Be” feels subdued, but it still finds time to be experimental with lots of stereo effects and that grungy riff battle at about 3:30, which keeps it interesting.

“The Lemon Song”, a hidden highlight of the album, is probably the biggest reach back to the band’s blues roots, directly borrowing from Howlin’ Wolf and Robert Johnson. It’s most notable for its wild innuendo and it’s hard not to raise a smile when Plant sings “Squeeze me baby, till the juice runs down my leg.”

I first discovered “Thank You” from Tori Amos’s gorgeous cover on her 1991 Winter EP, and in fact it was this song’s surprising absence on Zep’s “Remasters” collection that made me seek out this album in the first place. Undoubtedly the band’s most romantic song, it was the band’s first track with Plant providing all the lyrics. It’s a mix of soul, acoustic guitar and Hammond organ as well as some surprisingly heartfelt lyrics, particularly when you contrast them against the citrus shenanigans in the previous song. The Eastern-influenced version on Page and Plant’s “No Quarter” is worth a listen too.

“Heartbreaker” is another iconic classic, matching “Whole Lotta Love”’s formula of rifftastic glory with an experimental break (witness the guitar lick battle at 2:00). It segues rather brutally (not that I’m complaining) into the furiously catchy “Living Loving Maid (She’s Just a Woman)”. A song that Page hated, it initially feels a bit twee, but damn it still packs a wallop.

I’ve never really liked “Ramble On”, and I’m not really sure why. Listening to it again it’s got quite a charming mix of acoustic verse and thrashy chorus. Perhaps it’s the folky mischief that fills the song, but more likely it’s the very very silly Lord of the Rings lines in the second half (“In the darkest depths of Mordor, I met a girl so fair, but Gollum and the evil one crept up and stole away with her”, reminding us that you can be a creator of great rock music and an utter twat at the same time.

“Moby Dick” is without doubt the greatest drum fest of all time, not just the version on this album but in their countless live revisits. John Bonham hits it perfectly right the way through, and the 12-bar guitar riff that complements his epic solo is incredible too.

If you want a real treat by the way, the 20-minute long live solo on “How the West Was Won” played on full volume will make your day.

The album returns to proper blues with Sonny Boy Williamson ‘cover’ “Bring it on Home”, although there’s not much left of the track by the time they’re done with it. Still, the opening low-fi vocals and harmonica at the end makes it quite clear where they were coming from.