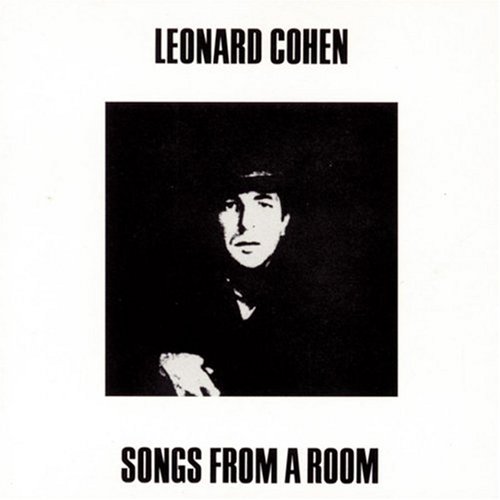 For me at least, one of the big paradoxes of Leonard Cohen is that, for all the outward melancholy, there’s something uniquely uplifting about his songs.

For me at least, one of the big paradoxes of Leonard Cohen is that, for all the outward melancholy, there’s something uniquely uplifting about his songs. Whether it’s “Sisters of Mercy”, “Suzanne” or the later and stranger “First we Take Manhattan”, every one of them hooks you in and feels indulgent, opiate even.“Bird on a Wire”, the opening and best-known track on this, his second album “Songs from a Room”, is a great example. It’s refreshing in its heartfelt honesty, it’s enveloping and it’s gorgeous. There are famous covers from Willie Nelson, The Neville Brothers  and kd Lang that are all outstanding, but leave it to the Man in Black to absolutely storm it.

The album continues with the stark, low-key feel it starts with, and it’s clear quite quickly that this is a different beast to his first effort. Cohen himself acknowledged that austerity, commenting that he’d been criticised by his peers for the polished sound of “Songs of Leonard Cohen” and this was an effort to do something simpler. “Song of Isaac” has a very Dylanesque old testament theme, and feels like the richest part of the album musically, and “A Bunch of Lonesome Heroes” has a simple Nashville charm to it (the album was recorded there). For the latter, one Amazon reviewer said it felt like a tribute to “Lord of the Rings”, which, while not at all true, sort of fits the mood of it.

The highlight of the album though is the haunting “The Partisan”, Cohen’s cover of “La Complainte du Partisan”, about the French wartime resistance. That it strangely fades out half way through doesn’t take away from the emotional punch of the lyrics – “There were three of us this morning, I’m the only one this evening, but I must go on, the frontiers are my prison”.

“Seems so Long ago, Nancy” feels reminiscent of his previous album’s highlight, “Suzanne”, except a little bit more bare, while the B-Side opener “The Old Revolution” brings back the folk song vibe, even with that twangy guitar sound you more commonly associate with (pre-nonce) Rolf Harris.

“The Butcher” is unremarkable, and highlights the inconsistency of the album, yet “You Know Who I Am” and “Lady Midnight” both emphasise Cohen’s unique ability as a writer of simple, honest poetry.

The biggest surprise of the album though is the intriguingly upbeat* “Tonight will be Fine”, but even then, the last hook of the chorus, “… for a while”, keeps that eternal sigh flickering.

For newcomers, “Songs from a Room” is far less accessible than its predecessor, and the bleakness may not be to everyone’s taste, but the stripping away of the layers to just the dark poet and his guitar makes you appreciate just how fucking good the man is.