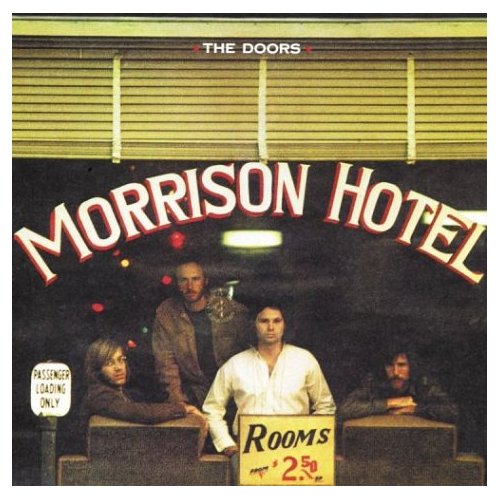 Showing a different side to The Doors mythology, “Morrison Hotel” is a capable and happy blues album with a few sprightly suprises on board.

“I’ve been singing the blues ever since the world began” 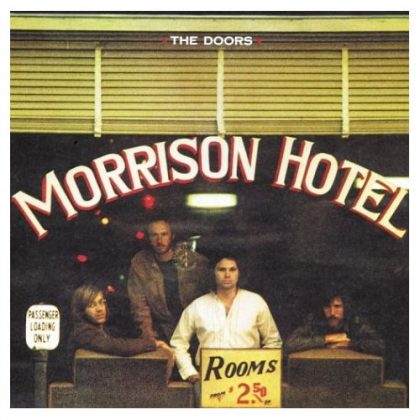 For all the musical skill floating around in the band, the fact is that it’s hard to separate the story of The Doors from its uniquely talented but similarly ridiculous lead singer. Just as Melody Maker mocked The Doors’ 1993 reunion as akin to the Jimi Hendrix Experience reforming, Jim Morrison was, and is, The Doors.

By the time their fourth album, “Morrison Hotel”  turned up in February 1970, the band had gone from creating their eponymous and classic debut to the decidedly iffy (but hugely successful) “The Soft Parade”, packed with experimental weirdness and pomposity. Meanwhile Morrison had degenerated into full-blown alcoholism and whipping his todger out on stage in Miami (and facing the prospect of imprisonment and hard labour for his troubles).

For “Morrison Hotel”, they decided to return to their blues-rock roots, and it’s an album with far less of the psychedelia that their following had gotten used to. From the opening “Roadhouse Blues”, it oozes blues respectability, even with Morrison’s slurred lyrics, making it perhaps the best-known track from the album.

There’s also a Crystal Method remix out there which I enjoyed far more than I’m proud of, but I digress.

Anyway, moving right along, “Waiting for the Sun” is a subdued affair that’s arguably the most Doors-ey track of the bunch, and with reason, originating in sessions for their album of the same name two years previously.

It works in sharp contrast with “You Make Me Real”, a proper funky rock stomp complete with electric piano and cries of “roll baby roll…”. Lester Bangs called it ‘a thyroid burst of manufactured energy worthy of a thousand mediocre groups’ but then he was hardly the band’s biggest fan. Actually it’s a hidden gem.

“Peace Frog” is a brave and exciting effort, full of funk with a delightful interlude of Morrison’s spoken word poem “Newborn Awakening”, and it always draws a smile. It segues seamlessly into “Blue Sunday”, romantic, drifting and quite lovely, with some rather nifty guitar from Robby Kreiger.

That surprising funky twist comes back on “Ship of Fools”, which closes Side A, leaving you with a feeling of optimism that is, let’s be honest, kind of unexpected.

With “Land Ho!”, which kicks off Side B, it turns out that not only do The Doors have a happy side, but are more than capable of a little humour when it suits them (who knew?). “Land Ho!” is full of Davy Crockett-inspired mischief and is joyful for it.

“The Spy” floats on by with bluesy harmony, and coins the phrase “I am a spy in the house of love” decades before Was (Not Was) got their hands on it. It’s more a filler track, as could also be said for the following “Queen of the Highway”.

“Indian Summer” evokes memories of “The End” with its sublime bassline, even though it’s far less ambitious, but still works as a charming and gentle ballad, despite being just 156 seconds long.

The final track, “Maggie M’Gill”, reeks of the blues, and with its starting bars could be mistaken for BB King. It’s a lyrical treat too, with lines like “Illegitimate son of a rock and roll star, Mom met Dad in the back of a rock and roll car, yeah”. It ends an album that, while far more interesting in the first half, keeps its energy and spark throughout and establishes the band as a legitimate blues-rock performer. While their days were numbered, they were still capable and energetic with this, their penultimate studio album.