Following a disappointing first album, James Taylor returned to the studio with a powerful country-rock songwriter work, famous for its title track and soulful anthems like “Fire and Rain”. 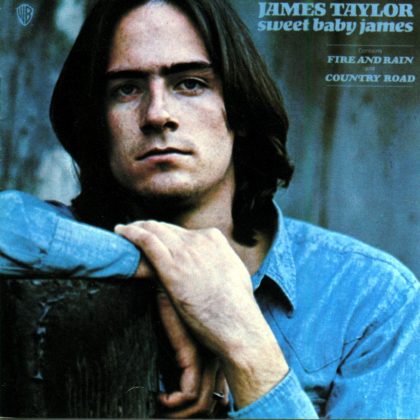 Considering his critical recognition and massive album sales, I feel slightly guilty that I’d never really come across James Taylor til he showed up on an episode of “The West Wing”.

Born in Massachusetts, Taylor grew up in California and discovered his musical craft in Greenwich Village and London. He was the first non-British artist to sign to Apple Records, and his song “Something in the Way She Moves” was a big influence on George Harrison (you guess which song).

After his first album failed to hit it big, he enrolled his friend Carole King and strove for a more pastoral folk sound, mixing acoustic rock with the mood of his inspiration Woodie Guthrie. The title track, which was a gentle hymn to his infant nephew, is a blend of cowboy anthem and lullaby that stands out for its kindness and maturity, particularly for the uninitiated. Taylor considers it his favourite work.

Elvis covered it too though, which is worth a peep.

Taylor follows with “Country Road”, and a cover of the 19th-century folk song “Oh Susanna”.

“Fire and Rain”, which opens Side B, is probably Taylor’s most famous sound, and it’s a powerhouse of soul, pain and rich imagery. It’s broken into three verses, the first of which is a tribute to his childhood friend, who took her own life just prior to the album’s creation. The later verses sing about Taylor’s own struggles with drug addiction and fame. Interestingly, his lyric “I’ve seen lonely times when I could not find a friend” inspired Carole King (who played piano on the song) to write her own signature track “You’ve got a Friend”.

Side B continues with the upbeat anthems “Blossom” and “Anywhere Like Heaven”, the latter of which is rich with steel guitar. Taylor’s signature humour shows up on the final two tracks, “Oh Baby Don’t You Loose Your Lip on Me” and “Suite for 20G”. The latter was named after he was promised $20,000 for completing the album, and combines three of his half-written songs into a medley. It’s a love song to rock and role, with lyrics like “Boney Maroney and Peggy Sue, got the rocking pneumonia, got the boogy-woogy flu, hey.”

James Taylor’s career has carried on for nearly half a century (his album “Before this World” topped the charts in 2015), but this stands out as his greatest work, a soulful and young singer-songwriter album from the heart of rock’s finest days. It really shouldn’t have taken me this long.