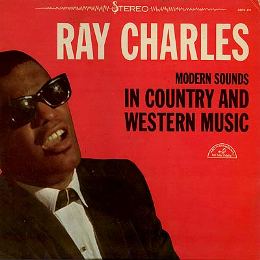 It’s only when I look back now, in the context of the era, that I realise just quite how important Ray Charles was. It wasn’t enough that this was the guy who basically kicked off what we come to know as soul music today, it wasn’t enough that he was a black superstar in an ugly, segregated America, it wasn’t enough that his voice is such a part of the modern psyche that you don’t so much recognise it as react to it by instinct. No, with this album, where he dove headlong into old Hank Williams and Everly Brothers songs with a raw R&B fire, it’s hard to imagine just what a shock he must have been.

And the best part? This is not an album that feels like it’s trying cunningly to genre-shift its songbook; every song feels lovingly crafted and totally at home with Ray’s proto-soul swing. From “Bye Bye Love”, which opens the album, to “You don’t know me” (now a Ray Charles classic), all the way through to Hank Williams’ “Hey Good Lookin’”, this is an album that holds together, lovingly crafted, soulfully sung and now a part of music history.