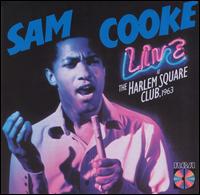 Sam Cooke, who was tragically (and suspiciously) shot in a hotel in 1964, never really got the chance to be huge. He’s remembered now for early, slightly raw and sexual soul music, the classic “Wonderful World”, the delightful “Cupid”, and the outrageously fun “Twistin’ the Night Away”. This album, which took 22 years from recording to release, is a snapshot of the man setting his audience on fire.

It’s a fantastic album really. It was recorded in a downtown Miami club, and you can feel the sweat and smoke dripping through the speakers when you listen to this (which, if you’re like me you will do repeatedly). It’s a brilliant album; in fact many have argued that it’s THE best live album ever made. I won’t touch that thread though.

Although the 18 months Cooke had ahead of him were bleak; the tragic death of his infant son, his descent into alcoholism and finally his own death; this is a glorious snapshot of a magnificent artist at his soulful, brilliant best.

I can’t stop playing it.