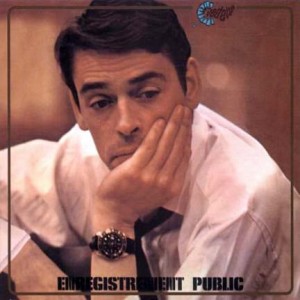 So there we were driving to Ikea on Saturday morning, the lad in the back seat and a weekend ahead. The missus had been curious about where I was up to with ridiculous 1001 albums thing I was doing. I said all was good – we’d had a couple of Beatles albums and some Bob Dylan and there was some Dusty Springfield soon. But for now we’d just play the iTunes playlist I had with a lot of the albums here on.

Anyway, we got through “A Hard Day’s Night” by the time we got past Junction 19 Of the M1 and then this little gem appeared on the stereo.

“What’s this French shit then?”

To be fair to the good lady wife, this is a pretty tough album to get your head around at first. If it wasn’t for the fantastic Scott Walker collection of Jacques Brel songs I had a few years ago, it would have been tougher.

Jacques Brel heralded the French-Belgian chic that caught the mid-sixties zeitgeist like those ’Keep calm and whatever’ posters do today. Sacha Distel and Charles Aznavour would soon sail up the charts, and Bob Dylan would refer to the latter as one of the greatest performers he had ever seen. Jacques Brel though, Jacques was something different.

Maybe it’s the melancholy romance in his songs, the sombre notes of “Amsterdam” or “Tango Fenèbre”. Maybe it’s the drama, the satirical nods to the audience or maybe it’s the mystery. He is a storyteller, and while if, like me, you lack for cunning linguistics, the stories don’t make themselves known to you, it’s still a rich tapestry of sound. This live album was recorded at the Parisian Concert Hall, which was a pretty serious venue, and you can hear the effect he has on an adoring audience. This is how his songs were meant to be played, not in a studio, but directly to his listeners.

As a live album it’s rich and delightful. Discovering Scott Walker’s covers album is still an essential though.