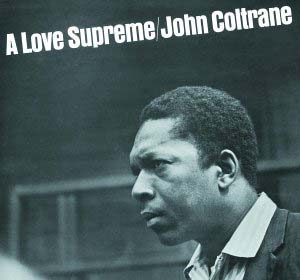 One of the problems with writing these posts is sometimes you have to dodge the reverence stuck on to the albums in question. Given my troubles getting into the whole jazz thingy, having to write about an album that’s been described as “damn near perfect” and “the most important jazz album of all time” without feeling the need to gush uncontrollably is a tough one. Am I just not getting it?

Actually, maybe (on this album at least), it’s the latter, because it took me a few listens to really enjoy it. On my first listen it faded into the background, with only the early repeated “A Love Supreme” mantra making me think either of that Robbie Williams song or Chicken Supreme, and it sort of blocked my path through writing my way through these albums because, frankly, I had no idea what to say.

So it took me a few listens to get my finger on this one, yeah. It’s a conceptual album in four parts (yet three album tracks, confusingly), that’s half old-school bebop and half experimental freeorm (you know, where you have to be either concentrating or drunk to get it). It’s a tribute to God, religion and Coltrane’s search for purity (well, according to Wikipedia anyway) and it’s diverse and confident.

So what do I have to say? Well, it’s a good album. It’s bold, it’s energetic and there’s a lot of disparate elements into it. And in Part III: Pursuance, there’s a drum solo that would make John Bonham shit his pants. So yeah, not bad really.