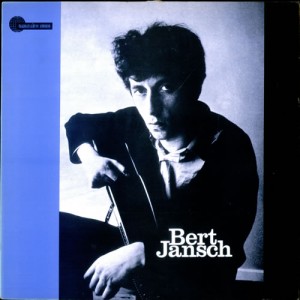 I’ll admit to having never heard of Bert Jansch before this tune trek kicked off, and it took me a few listens before I got past trying to work out who he reminded me of and actually appreciate the album (It was Donovan by the way). Shame really, because once you unravel this one you get quite a bare but interesting mix of lyrically mature folk music and some rather nifty guitar playing.

Jansch was born in Glasgow to German parents but his career took off once he moved to London, getting popular in the folk and jazz clubs. Basically, he got the whole sixties folk scene going in the UK, formed Pentangle and was a big influence on a lot of artists including Neil Young, Fleet Foxes and and Bernard Butler.

Once again, the challenge here is putting the album in the context of its time. It sounds a lot like Donovan, and not only that but you can see the evolution ahead towards Ralph McTell, Neil Young and Tim Buckley. This album though is far too humble for such talk. It feels quiet, and you never forget it’s just the one guy and his guitar, recorded on an old tape recorder. And yet, on tracks like “Strolling down the Highway”, which opens the album, you can hear his flair and confidence. When things get darker, such as “Needle of Death”, his chilling tribute to a friend who died of heroin overdose, he handles it brilliantly.

Still, he’s confident enough on the guitar and on the vocals, and this is a convincingly ideal addition to these hallowed pages.