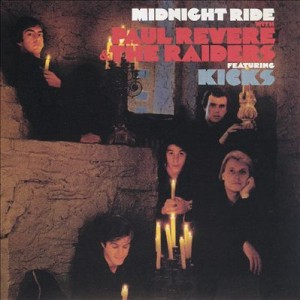 It’s kind of hard putting a finger on this one. The first time you hear it, it sounds like caustic, guttural snarling punk. The next time, it sounds like The Monkees chilling on a Sunday afternoon. The next day, you’re hearing The Animals singing with American accents.

To say this album is enigmatic is to put it mildly. But while it took me a couple of listens to really get my teeth into, what is obvious throughout is that, for a band that got famous (well, slightly famous at least) arsing about on TV with Dick Clark, there’s a lot of skill going on here.

The first track, “Kicks” is a solid, in your face rocker, and the likes of “Always Tomorrow” and “Little Girl in the fourth row” keep swinging the genres around without stumbling (the latter would have fitted nicely on “Pet Sounds”), and from there it gets more confident and stretches its wings.

The big track on here is their cover of “(I’m not your) Stepping Stone”, which was later covered by The Monkees and, infamously, The Sex Pistols, who quite clearly got their inspiration from this version.

The last track, “Melody for an Unknown Girl” pushes the boundaries of self-parody and cheese maybe slightly more than necessary, but it’s still haunting and soulful.

The sounds on this album are not breathtakingly innovative, but they’re done damn well, and this is a slice of obscure 1966 that is musically hard to fault.