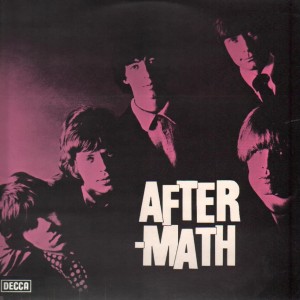 These days, it’s sometime easy to forget that, alongside the familiar rockin’ side of the Stones that gave us ‘Jumping Jack Flash’, ‘Exile on Main Street’ and ‘It’s only Rock and Roll’ there was a more softly spoken sixties band, rich in Carnaby Street swagger and sitars.

That ‘other’ Rolling Stones is out in full force on this album. After it kicks off with the brilliant ‘Mother’s Little Helper’ (or the always mesmerising ‘Paint it Black’ on the US release), it gets going with an interesting and sometimes wandering musical journey that even after a good few listens I have trouble getting a finger on.

Of course it didn’t help that Spotify plays the US release which appears to have been eviscerated of the best tracks.

It’s the first Stones album to be properly written by Jagger and the boys, and it’s a departure from the raw bluesy feel of “England’s Newest Hit Makers”, but it’s a hell of a lot more confident too. It doesn’t always work – for every gem like “Stupid Girl” (saucer of milk Mr Jagger?) there’s rambling Elizabethan toss like “Lady Jane”, but it’s got “Under my Thumb”, the extended jam of “Goin’ Home” and the joyous original of “Out of Time” on it so it’s hard to complain.

There were greater things to come, sure, but if you want a snapshot of legends starting to get their mojo working, this is a pretty damn good listen.