“I used to be into dope, now I’m into racism. It’s much heavier, man. Fucking wogs, man. Fucking Saudis taking over London. Bastard wogs. Britain is becoming overcrowded and Enoch will stop it and send them all back. The black wogs and coons and Arabs and fucking Jamaicans and fucking (indecipherable) don’t belong here, we don’t want them here… England is for white people, man. We are a white country. I don’t want fucking wogs living next to me with their standards… We need to vote for Enoch Powell, he’s a great man, speaking truth… Enoch for Prime Minister! Throw the wogs out! Keep Britain white!” 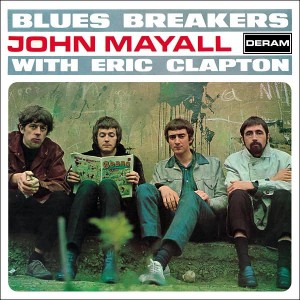 Looking forward on this list, there’s going to be a few Eric Clapton appearances – Derek and the Dominoes, “While my Guitar gently weeps”, Cream, solo stuff. So, before I go any further with this review, let me just remind you of Clapton’s infamous quote back there, one that he’s never apologised for incidentally.

Eric Clapton is a cunt.

Eric Clapton is a racist, small-minded cunt, and the irony of his vile racism is that he’s built his entire fucking career ripping off black blues musicians and got rich off it.

True, he’s pretty nifty on the old Fender, and between Cream’s back catalogue and this, he’s put out a few belters. But it would be churlish to talk about the man without pointing out who he was, and continues to be.

I LOVE this album. It’s pure uncut rich delta blues, a gorgeous treat of amazing guitar (god damn you Eric). There’s love here – every track is full of veneration for the bluesmen that went before, but this is no tribute album, this is the real thing.

“All your Love” is a spectacular opener, and the follow-up, “Hideaway” is delicious BB King boogie territory. Mayall’s original compositions, like “Little Girl” don’t compromise on that blues tradition, and when they get into the big tracks, like an absolutely storming cover of “What’d I Say” with it’s Zep-esque drum solo (and the sneaky “Day Tripper” riff in the break is pure joy by the way), it really kicks off and it doesn’t let up.

This album was put together to capture the energy of what the band were doing live, and while it’s invigorating, you can’t help but feel it doesn’t hold a candle to what these boys were like live.

The germinating seeds of Cream are obviously here, not to mention Led Zeppelin, but the best way to enjoy this one is just to listen to it on its own merit. It’s a proper, genuine blues album that stands up there mightily with Muddy Waters and John Lee Hooker as one of the true classics.