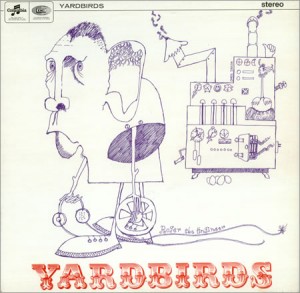 It’s kind of a shame that this one followed John Mayall and the Blues Breakers in the book, because it’s going to invite inevitable comparison. After all, they’re from the same stable, and Clapton jumped ship from one to the other.

In contrast to “Blues Breakers”, at first listen this one feels slightly lighter, slightly more pop-orientated, and (for me at least), it took a few listens to learn that there really was a lot more to it.

It’s fired up and comfortably part of its era, with rich and energetic blues riff flirting with proto-prog rock chants and psychedelia, but the whole thing drips confidence and a subtle hint of abrasive grit.

It doesn’t always get it right – for every stormer like “The Nazz are Blue” there’s the likes of “Turn into Earth” which messes with proto-prog rock (just say no, kids), but even there the sharp finish shows they were wearing their blue suede shoes when they put it together.

Taking stock of The Yardbirds now, they’re (arguably) more famous for their progeny than their own stuff, but with tracks like the Bill Haley-channeling “Over under Sideways Down” and mischief like “Psycho Daisies” (on the reissue), they were a force in their own right, and this album is a great place to start.