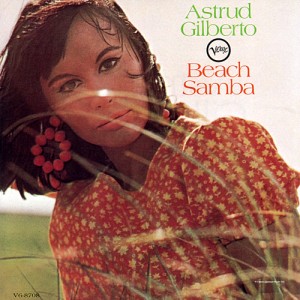 – it’s hard to argue with her as she kicks off this sweet and hypnotic album.

Astrud Gilberto, previously known as the voice of “The Girl from Ipanema”, which she arrived at almost by accident, gets her chance to stretch her wings on her own album here, and what she gives is a romantic, delicious 39 minutes of gentle bossa nova that you’d have to be dead inside not to warm to a little bit.

It gets experimental, with instrumentals like “Canoeiro” and the twee but lovely “You didn’t have to be so nice”, sung in duet with her six-year-old son, but it’s solidly charming throughout.

True, you can tell on that opener, “Stay” and later tracks like “A Banda (Parade)” that musical range isn’t her selling point, but at the same time, you don’t really care. That girl from Ipanema is back again and she’s instantly identifiable, seducing you from the other end of the dance floor, and it all sounds like you’re falling hopelessly in love.