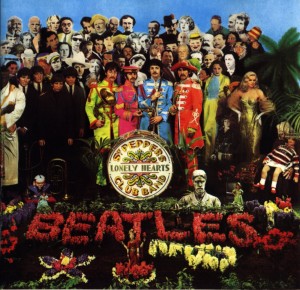 Where am I supposed to begin with this one then? This isn’t just the album that changed rock music (at least in the public consciousness), but it’s the biggest selling album of all time, or thereabouts anyway (can’t be bothered to look it up right now).

It’s the masterpiece. It’s the sacred cow, beyond critique, surely?

Plus, I’ve heard this album so many times, I know every line, every chord, every key change. How am I supposed to come at it fresh ?

Well, for me SPLHCB (as I shall refer to it here on in) was, while around in my childhood, something I discovered properly in my first year of sixth form. Understand that I was shy, awkward, far too subservient to peer pressure and I was wearing a Jesus Jones T-shirt at the time, but it felt quite daring to sit on the bus home with it clearly resonating through my headphones. Surely that’s old people’s music?

It wasn’t long before I grew a pair and started enjoying the Fab Four a bit more, but this was my way in.

I wish I could remember more of those first impressions. I liked the opener, loved “Lucy in the Sky with Diamonds”, rolled my eyes at “When I’m 64” and “Lovely Rita” and LOVED that hard rocking reprise of the title track at the end. And then I just got lost, mind blown, through “A Day in the Life”.

It’s from that opener that you get the feeling that this album is a different beast to its predecessors. It’s so familiar now that it’s difficult to see it for itself, but I do love Paul’s “I don’t really want to stop the show…” line for no other reason than realising what a stormer this would have been in a live performance. Sad that the boys had given up on stadium gigs by then really. Jimi Hendrix used to do it though apparently, as did the Polyphonic Spree, and there’s also a pretty good Macca version on “Trippin’ the Light Fantastic”.

“With a little help from my friends” is another one that’s been worn down over the years through easy listening over-familiarity. Not much to say about it really, except I’m always up for a Ringo number, and that Joe Cocker version wasn’t bad I suppose in a surprisingly soulful way.

“Lucy in the Sky with Diamonds” on the other hand deserves some sort of opinion. Sidestepping the argument about the initials and whether they’re a drug reference (Lennon said no, McCartney eventually said yes, and I wish I could stop thinking about “Ebenezer Goode”), it is a beautiful song, not the equal of “Strawberry Fields Forever”, which really should have made it onto this album, but it’s proper Lennon in a whimsical daydreamy way.

“Getting Better” for me is where this album gets interesting. It’s telling as a Lennon/McCartney conflicted track, with Paul’s “getting better” chorus contrasted with John’s downbeat “can’t get no worse” backing vocal, and of course the wife-beating line is John’s, because he was a bastard like that. Always enjoyed that Gomez cover too.

“Fixing a Hole” is at first glance just another druggy song, but for me it feels like the spiritual successor to “I’m only Sleeping”, and it’s nice and drifting.

Never really got “She’s Leaving Home” to be honest. It feels like a desperate grab at the heartstrings, but after a few listens I will admit that there’s something beautiful about John’s parent chorus and the sadness behind it, and I am always reminded of an old Uni friend’s knowing wink at “meeting a man from the motor trade” (“Oh aye?”).

“Being for the Benefit of Mr Kite” is a controversial one – as I’ve been preparing for this review I’ve talked to people and they’ve berated it, suggesting it’s the point on the album where the boys disappeared up their own arse, but for me, I’ve always enjoyed its charm. The Eddie Izzard version on the “Across the Universe” soundtrack is entertainingly silly, but if you want a real treat, check out this amazing video on the guys who tried to recreate the original poster it came from (it helps if you’re a shameless graphic design nerd for this mind).

It was pretty clear that, by the time “Within You Without You” came along, George was starting to drift away from the rest of the guys. I always thought that it was a bit weak and fillery, but listening again I stand corrected, because there is something hypnotic about it when you REALLY listen to it, and it’s arguably the most mature track on the album, and the tabla that comes in at about 0.23 sounds gorgeous every time.

Lennon hated “When I’m 64”. He called it “fucking granny music”, although that was probably an attack on Paul more than the song.

As far as it and “Lovely Rita” go, well, they’re a great example on why this album is so hard to write about properly. They’re just too familiar to really see – we used to sing “When I’m 64” in assembly when I was eight. What does jump out though is that neither track really feels at home here. “Lovely Rita” is actually a really accomplished track, but it would have fitted on something like “Rubber Soul” a lot more confidently (actually it reminds me of “Norwegian Wood”) and, particularly by the time you’re well into side 2 of SPLHCB, it feels misplaced. Pink Floyd watched them record it and pinched the effects for “Pow R Toc H” though, so ta for that.

And then we’re into the last round… I’ve heard it argued that “Good morning Good morning” is the weak point on the album, more brevity than quality, but if you listen to it carefully, the beat changes and Ringo’s drumming jumps out at you as superb. It starts of as a cacophony, but then that first verse kicks in – “Nothing to do to save his life call his wife in… ” and it all starts to rock.

It eases in nicely to the reprise of SPLHCB too, and I challenge anyone not to love that moment where Paul whispers 1, 2, 3, 4… and the guitars start to moan. When I was 16 this was the best bit for me, and it’s still gorgeous. Good thing really, because look at the next track, right?

“A Day in the Life”… well, fuck. There are so many things to say about this track. It’s orchestral, it’s epic, it mixes terrifying cacophony with joyful rhythms, it balances Lennon’s poignant surrealism with Macca’s cheery banter, it just gets it all right. But the big thing for me is… it sounds like nothing else that had gone before. I’ve heard it described as “The Best Beatles Track”, and while I’m slightly too spineless to stand by that conclusively, it is just wonderful. It’s less than five minutes long, but it’s more than the equal of prog rock epics to come, and it never NEVER gets old.

Looking back, SPLHCB is a landmark album. It was created as a response to “Pet Sounds”, and while it owes surprisingly little to that album musically (there’s a faint tinge in “Good Morning…” but I might have imagined it) it does outmatch it (sorry musos). Still, while it’s not actually the boys’ greatest work, it is arguably not just the turning point for themselves but for the whole of music, and perhaps the last time they worked together as a proper cohesive unit, and for that we should salute it.