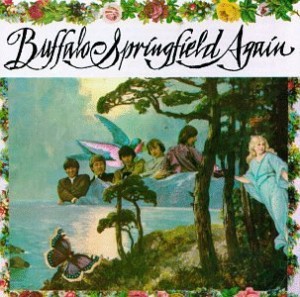 We’re into proper psychedelic territory now. As I look forward to the next twenty or so albums, I wish I could avoid the feeling that chewing through all that Love and Captain Beefheart and Moby Grape and Jefferson Airplane is going to be a hard fight, but this is where that long slog starts, and it’s a pretty good place to start.

I’ve always loved “For what it’s worth” – there’s something about Stephen Stills’ iconic chorus that always evokes the spirit of the age and all the pain and euphoria around it, and it’s a beautiful song. It’s not on this album, but the ghost of it certainly is, and while for me it never quite reaches that peak, it does a pretty good job.

It starts, slightly unexpectedly, with “Mr Soul”, a well-named song if ever there was. It’s a great combination of the familiar Stax soul sound with acid rock guitar and a fucking awesome beat – surely a contender for one of the best opening album tracks ever.

The mood settles down a bit afterwards, with tracks like “Expecting to Fly” being warm, dreamy and ethereal, and that ambient floatiness is there even for more upbeat tracks like “Bluebird” and “Rock and Roll Woman”. Still, it’s got a few more stormers to come, with “Good Time Boy” reaching back to that bluesy soul sound again, and the live “Broken Arrow” being epic in imagination and structure as well as Neil Young’s beautiful vocals.

In the rock encyclopaedia, Buffalo Springfield are mainly going to be remembered as the springboard for Neil Young and Stephen Stills’ careers. But at the same time, with this (far too short) album, they demonstrate that even at the start, they had a lot of talent and vitality which is worth paying attention to with a proper listen of this album.