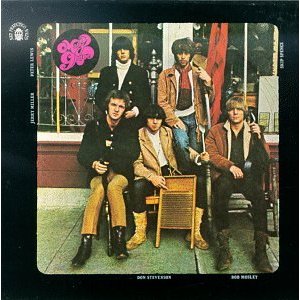 “The Grape’s saga is one of squandered potential, absurdly misguided decisions, bad luck, blunders and excruciating heartbreak, all set to the tune of some of the greatest rock and roll ever to emerge from San Francisco. Moby Grape could have had it all, but they ended up with nothing, and less.”

“What’s big and purple and lives in the ocean?”

Unfamiliar as I was with these boys before listening to this album, part of my pilgrimage would inevitably learning more of Moby Grape and their history. It makes for grim reading – they had a brief moment of rousing glory, but it wasn’t to be. Instead, their story was one of crooked management, awful marketing (the general consensus is that their career was stillborn after some bright spark released five of their singles on the same day), the dreaded “American Beatles” pitch syndrome, and eventually declining quality and mental illness.

A lot of the tale falls around Skip Spence, co-founder, guitarist and singer/songwriter. Though his work shines on this album, it wasn’t long before he’d succumb to LSD abuse, paranoid schizophrenia and alcoholism. He’s been described as “one of psychedelia’s brightest lights” and compared to Syd Barrett, but apart from his later critically-lauded solo album “Oar” (yes, it’s on the list btw), his career was doomed to burn out.

Still, there’s something distinctly admirable about Moby Grape. They weren’t just notable in as much as all five members contributed to singing and songwriting, but they were distinctly rebellious about it all too – the album cover got quickly airbrushed in a storm of moral panic after someone noticed Don Stevenson was subtly flipping the bird in the photo.

This then, is the album that they’re truly remembered for. It’s an interesting beast – while it’s been praised as the first psychedelic country-rock album (and surely there can’t be too many of them), the truth of it is that it’s so diverse in its sound that you can’t really pin down the Moby Grape ‘sound’ from just a couple of listens.

It kicks off with fire in its soul, with the first three tracks, “Hey Grandma”, “Mr Blues” and “Fall on You” all storming and energetic blues numbers, but the tempo slows for the gentle “8.05”. As you explore further, there are more delights to be found – “Naked if I want to” is hard not to like and “Ain’t no Use” is upbeat, rousing and fun, and the highlight of the album is undoubtedly the mature, tender and quite lovely “Sitting by the Window”. From there it drags slightly but it brings it all back for the closing track “Indifference” which is anthemic and inventive.

At just 33 minutes 11 seconds it all goes by pretty fast, but it stands up to repeated listening, and even today shines as a great relic of Summer of Love psychedelia.