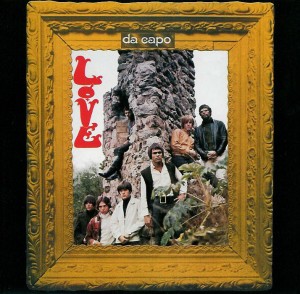 Generally considered as a ‘half-legendary album’ thanks to the addition of the oft-maligned “Revelation” which takes up the whole of Side B, this one takes a little bit of time to really get the hang of, but it’s worth it.

I’ll confess that I didn’t know much about Love before this album. For a band that once had The Doors supporting them, and whose leader, Arthur Lee, is still touring, this was an act that never really made a big impact out of muso circles. Shame, because there are some gorgeous treats in here.

It opens with the upbeat rockiness of “Stephanie Knows Who”, which is fun but also quite layered, with a few innovative tempo changes to keep you interested. It segues into the gorgeous and hypnotising “Orange Skies”, with a pleasant drifting feel and some lovely flute here and there.

The next track, “Que Vida” could be accused of being just a little too similar to its predecessor on the album, and it does detract from its beauty that you have to be paying attention to notice that it’s begun. Still, it’s nicely paced with some good woodwind here and there. But it’s the next track, “7 and 7 is” where you really have to sit up. Generally known as Love’s big hit single, it’s a right corker – it mixes a great tempo with that delicious garage rock sound that we got from The Sonics and The Monks, but the difference here is it’s professionally layered and all the richer for it. There’s a demo version on the reissue that’s worth a listen too.

That layering is something that jumps out in this album in fact – this is a great early example of multitrack recording and harnesses the capabilities of it in a way that you only usually expect for more modern albums.

“The Castle” is unremarkable acoustic fluff, although there’s some nice bass guitar in the bridge, and the harpsichord and Spanish guitar that kick in later give it a nice psychedelic feel.

“She comes in colours” is the song that birthed The Rolling Stones’ “She’s a rainbow” and it manages to pull off the clever trick of being both romantically beautiful and psychedelic perfectly. That nifty flute makes a reappearance too.

It’s easy enough to see why “Revelation” is controversial. It doesn’t have much in common with the rest of the album – 19 minutes of disorganised and excessive blues jamming with the occasional sheep noise and some moaning thrown in doesn’t gel well with the gentle psychedelic pop of Side A. And it’s got its fair share of detractors – the “1001 Albums” book described it as “frankly only worth listening to once”.

I quite like it actually. It’s overblown, sure, and probably unnecessary, but it’s no worse than a lot of the experimental stuff that came from the Summer of Love, and it does rock when it needs to. Remember we were only four years away from the likes of “Moby Dick” and “Echoes” at this point, and it’s got a lot in common with the Stones’ live “Midnight Rambler” and some great drum solo at about 17 minutes in, so I’m willing to cut it a break.

When this, their second album, came out it upset the charts a bit, but was quickly overshadowed by its massive successor, “Forever Changes” just a few months later (and coming soon). Still, it’s got some fine moments, and is worth an open-minded gentle listen.

Oh, plus kudos to Arthur Lee for dressing like Han Solo on the cover.