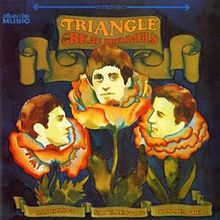 The Beau Brummels might be a good contender for the greatest could’ve beens of the sixties. Pretty obscure now, they rose into the US top 20 twice in the early nineties sixties with the sublime “Just a Little” and “Laugh Laugh”, the latter of which got them a cameo on “The Flintstones” (as The Beau Brummelstones), but despite a distinct folk-rock style that’s so reminiscent of The Byrds that you have to stop and remind yourself they were doing this shit in 1963, they never made the big leagues.

By the time this album came around though, things were on the turn. Illness had forced them to step away from touring, and their previous album, “Beau Brummels ’66” was a disappointing mess of cover versions. Still, their impetus to return to the studio paid off for this one.

On my first listens, it did kind of escape me to be fair. There’s a pop sensibility to the whole thing that seems out of place in the mass of psychedelia that was 1967. It wasn’t until a while later, when I realised that many of the tracks (notably “The Painter of Women”) had planted themselves firmly in my head that I began to reappraise it all.

There’s some real invention here. Always at heart a folk band, tracks like opener “Are you Happy?” have a welcoming catchy feel, and later tracks like “The Keeper of Women” keep up that mood while becoming kind of epic and mystical with it.

While it doesn’t really slip up as the album progresses, that spark sometimes subdues – the title track and “Nine Pound Hammer” don’t really capture the ear, and “Magic Hollow” is flirting far too closely with Tolkein bollocks for me. But for a band whose fortunes had been rough, this is still a confident and mature album, and as it closes with the haunting “The Wolf of Velvet Fortune” and the vaguely tongue-in-cheek closer “Old Kentucky Home”, you’re inclined to forgive it its trespasses.

It never got past 197 in the album charts, which is a pity because this is worth a listen or two, richer than you’d expect and in places quite memorable.