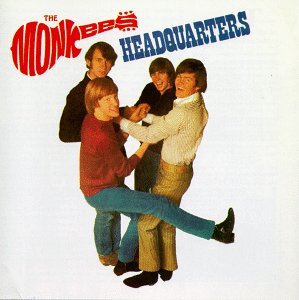 “Hey, look, the Monkees. They were a huge influence on the Beatles.”

It’s one of the big ironic jokes of the sixties that The Monkees, perhaps the epitome of a manufactured band, cynically thrown together to capture the fun mood of “A Hard Day’s Night” for American audiences, came to be an impressively talented and almost cerebral band in their own right.

They weren’t always of course, but even in their most manufactured period they still managed to create some perfectly crafted pop (I’ve always found the wedding disco filler “Daydream Believer” kind of magical despite its overfamiliarity).

For this album though, the gloves were off – they sacked musical supervisor Dan Kirshner and pushed the boundaries a bit, and what they came up with is diverse and still has the poppy edge, but it’s still an eyebrow raiser for a band with such fabricated beginnings.

The first track, “You Told Me” leaves you with no doubt where their creative inspiration hailed from. It’s a virtual mashup of “Dr Robert” and “Taxman”, but for all its fab fourness, it’s still a great track. “I’ll Spend my Life with You” is similarly ‘fab’, but there’s more character in it.

It changes tack a bit with “Forget that Girl”, a gorgeous and gentle ballad, and they really stretch out with tracks like “You Just Might be The One” and “For Pete’s Sake”, which evoke The Who and Buffalo Springfield” respectively. By the time the album comes to a close, tracks like the totally rocking “No Time” and the experimentation of “Early Morning Blues and Greens” underline the point that this is not the Monkees of old, and the closer “Randy Scouse Git” (released as “Alternative Title” in the UK, because we’re a bunch of pussies) brings it all to close with a deranged sense of fun.

This is an album that never really slips – while tracks like “Shades of Grey”, “Mr Webster” and “Sunny Girlfriend” don’t really jump out, they’re lovingly created and delightful. When the boys get playful with “Band 6” and “Zilch” you can’t help but smile, and on the latter you get treated not only to a fascinating vocal landscape but getting to discover where Del the Funky Homosapien got the sample for “Mr Dobalina” from.

The one that jumped out for me though was the gorgeous “I Can’t Get her off my Mind”, a true classic that’s the equal of “Daydream Believer” and even worthy of Buddy Holly, who it evokes beautifully.

If we’re being pedantic, this wasn’t entirely written by the band; three tracks were created by original songwriters Tommy Boyce and Bobby Hart, but this was still a declaration that the days of Monkee-ing around were done with, and things were about to get really interesting.