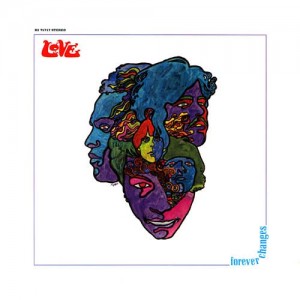 Despite not really getting anywhere in the charts on its first release, “Forever Changes” is generally seen these days as one of the behemoths of sixties psychedelic rock, a must-have for true music fans. At first though, it’s not easy to see quite why.

The first time I listened to “Forever Changes” (and it was the first time) it didn’t really sink in. What I heard was a mainly acoustic album with a few acid rock conventions and some impressive Spanish guitar here and there, but it wasn’t quite as aggressive or experimental as ‘Da Capo’ and wasn’t really blowing my skirt up. Just two reviews away from “Piper at the Gates of Dawn” all I wanted was to give it that average write up and start gushing about Barrett and the boys. But, hard as I tried, it just didn’t gel right.

Slowly though, my interests were peaked. Opening track “Alone Again Or”, while strangely familiar, had something hard-edged about it. Even with the Mariarchi trumpets, when the chords rise it kicks at you with a fury (playing it loud on my Parrot Zik headphones in the office did the trick).

That duality shows up again for the next track, the mind-blowing “A House is not a Motel”. It starts off mellow and feels like a jam to begin, and the drum builds nicely to a solo that simultaneously evokes the Amen break and Led Zep’s “Moby Dick” (which between them are about the nicest compliment you can give a drum solo). But then, when you get further in, when you listen to the lyrics, you realise how it slowly inches towards darkness – Arthur Lee screams about your waters turning to blood while the guitars sound like a slow descent into hell. And all the while that ever-present angry drum.

With the band on the verge of self-destruction, producer Bruce Botnick leant on session musicians for a lot of the hard work, and that diverse range of talent probably contributes a lot to the rich esotericism of the album. But for all its imagination and wonderful mastering (annoying stuttering of “The Good Humour Man…” aside), what really shines here is Arthur Lee’s dark but brilliantly insane songwriting (check out “Live and Let Live” for its opening line – “Oh, the snot has caked against my pants, It has turned into crystal, There’s a bluebird sitting on a branch, I guess I’ll take my pistol…”).

(As with every other sodding album from 1967), there’s been a lot of comparison with “Sgt. Pepper” with this album, but to me that feels kind of lazy as these are thoroughly different beasts. Better to compare it to the optimism of the acid rock that was exploding out of California at the time, and remember this as a reflection that there was a dark heart there, and that this album captures it with a beauty and melancholy romanticism that has made it a true classic of the age.