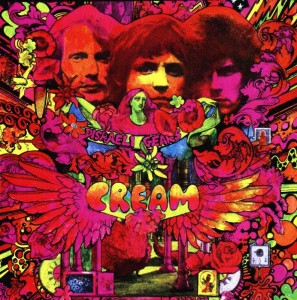 OK, so I’m not the biggest fan of Eric Clapton, but it’s pretty much an established fact that his best work was with Cream (go on, tell me I’m wrong). Thrown in with the legendary Ginger Baker and Jack Bruce, and here he was in the world’s first supergroup, on the cusp of moving from guitar blues to psychedelia. Great things were about to happen.

You wouldn’t really have known it at the time. While they were bowel-tremblingly good live, Cream’s first album, “Fresh Cream” was rushed and mixed conservative blues with overdone experimentalism, and though it did have great tracks like “I Feel Free” and “Rollin’ and Tumblin'” on it, it never really made a great impact. On “Disraeli Gears” though, they were more focused and clearly paying attention to the Summer of Love stuff going on outside the studio. It’s rich with psychedelic guitar wails and spaced-out lyrics, not to mention an iconic album cover that makes it pretty clear what’s going on inside the sleeve.

It kicks off with the familiar “Strange Brew”, which is a pretty good description of the album, and the wailing guitar riffs would define a lot of what was to come. It’s with the second track though, that you know you’re in new territory.

“Sunshine of Your Love” – what can you say? It’s one of the greatest rock tracks of all time, with an iconic riff that has become part of the ages. It’s a track I’ve always loved. I first fell in love with it hearing Clapton’s performance of it at Knebworth 1990, not for Clapton himself, nor Mark Knopfler and Elton John doing the supergroup shizzle in the background, but for an amazing Ray Cooper percussion solo.

Loved it. Played it to death. But let’s face it, if you want to enjoy “Sunshine of Your Love” then hear it from the man who was about to piss on Clapton’s chips.

(Play this fucker loud. Treat yourself).

The album settles back a bit after that. “World of Pain” is reminiscent of “I Feel Free”, and the rest of the tracks combine epic bombast (see “Tales of Brave Ulysses”) with bright but classic blues (like the far too enjoyable “Take It Back”), and after a few listens, you get the feeling of a real warm and imaginative mood by skilled musicians.

There’s quite a disparate range of tracks on here, and none really let themselves down* even if they don’t all stick in your head forever. “World of Pain” is surprisingly soulful, while “Tales of Brave Ulysses” and “SWLABR” have some amazing guitar and drum moments. And while the early odours of prog rock drift across from time to time, what you’re left with is a remarkable slice of classic rock experimentalism.

* Depending on how you feel about the daft but funny “Mother’s Lament” at the end anyway. Silly buggers.