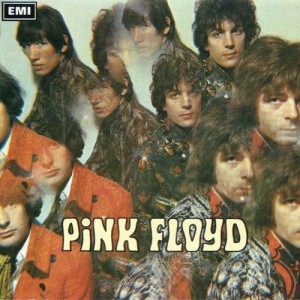 As I’m sure I’ve mentioned before, I’m a bit of a Floyd geek. But way back in the day, I came at discovering their stuff in a very conventional way, where the mediocre “A Momentary Lapse of Reason” got as much attention from me as “Dark Side of the Moon”, where anything before “Meddle” was consigned to beardy-weirdy hippy music, and Syd Barrett was as relevant to the band I knew as Pete Best was to the Beatles catalogue.

Even when, at 16, I forked out for the “Shine On” box set, it didn’t come with this album, opting instead for the equally mighty (if not quite as iconic) “A Saucerful of Secrets”. So it wasn’t until much later that I really started to get into “Piper at the Gates of Dawn”, a pity because not only is it a right belter, but it’s an absolutely crucial part of the Pink Floyd portfolio.

It’s not a perfect album, and it’s only when you look at it as a whole do you get a snapshot of who the band were – grand rock operas combine with silly songs about gnomes. But this is (minus bits and bobs on “A Saucerful…”) the only album with Syd Barrett, and he takes centre stage here.

“Astronomy Domine” kicks off in epic style with a delightful mix of Richard Wright’s gorgeous bass and Mason’s bombastic drum, and it feels like it truly is the launch here, as if the album is rising off the earth on a pillar of flame and damn, it sounds good. For a band whose sound more belonged to “See Emily Play” and “Lucy Leave” at the time, this track jumps out in terms of how much it feels like a proper, laser lights and inflatable pigs over Battersea Power Station Pink Floyd song. The band would often return to it over the years (it appeared on the 1994 “Pulse” tour as well as David Gilmour’s 2006 solo tour), and it remains a classic.

It’s a bit of a shift from there into “Lucifer Sam”, Barrett’s homage to his cat. I’ve heard this song described as like an old sleeping bag, instantly warm and comforting to listen to, but when you really listen to it, it’s quite bold in its sound. That bass line would crop up again over the years, but here it’s attached to an exciting tempo and really quite creative guitar. You can hear all that innovation killed stone dead in the piss-poor Lightning Seeds cover by the way, but I wouldn’t bother if I were you.

The pace changes for “Matilda Mother”, again Barrett’s work, and based on the fairy tales of his youth. It’s not the most dramatic track on the album, but Richard Wright does a fine job of the dreamy lyrics, and its vocal percussion sounds (better illustrated on “Pow R Toc H”), would soon become a foundation of the Floyd sound.

“Flaming” brings it back to the singles sound that the band were famous for – compare it to “Point me at the Sky” or “Apples and Oranges” for a hint of its roots. “Pow R Toc H” on the other hand is pure free form experimentation with echoes of, erm “Echoes” and “A Saucerful of Secrets” in it. It’s mainly notable for the fact that it was inspired when the band watched The Beatles recording “Penny Lane” at Abbey Road studios, and a lot of the sound effects were borrowed from that.

“Take Up Thy Stethoscope and Walk” is similar in its tone, if quite dark (hey, it was Roger Waters’ songwriting debut so what did you expect?) but it builds in speed to frantic guitar and keyboard from Barrett and Wright to something quite stunning. At The Drive In did a fantastic cover of it by the way, both totally faithful and fantastically insane.

Side B starts, just as Side A, with a great bit of ‘space rock’; in this case it’s the magnificent “Interstellar Overdrive”. More of a live classic, it’s been covered a good few times by acts as varied as T-Rex, Camper Van Beethoven, Pearl Jam and Teenage Fanclub, but at its heart it’s just a great tune to jam. A live version nearly made it onto the mostly shite “Ummagumma” but was removed at the last minute. If you want to hear what they were capable of though, check out the live version from “Tonight Let’s Make Love in London”.

Every great album’s got its “Frankly Mr Shankly”, and for “Piper…” It’s undoubtedly “The Gnome”. It’s never sat right with me to come off the epic journey of “Interstellar Overdrive” with a jump into singing about a gnome called Grimble Gromble, and although it’s very Syd, it’s certainly not his greatest work.

“Chapter 24” and “The Scarecrow” are pure psychedelia (playing the latter in my teens once caused my sister to bang on my bedroom door screaming “What the fuck are you smoking in there?”). “Chapter 24” is quiet and ambient, leaning on lines from the I-Ching for its mystical wallop, and while it’s mostly forgettable, it’s a nice mellow time out from the album.

“The Scarecrow” was originally the B-Side to “See Emily Play” and its inclusion as an album track feels random. Still, as my sister would attest to, it’s haunting in its three minutes of cello, existentialism and synthesised strangeness.

I love “Bike”. And despite what I said earlier about not really discovering this album till much later in my Floyd journey, I always did. It’s charming, it’s silly, it’s vaguely dark and it ends with a wonderful cacophony that reminds you just what an amazing trek you’ve been on with this album.

To be honest, from a creative perspective, Floyd were about to (quite soon) get into bigger and bolder things, and it’s more than worthwhile treating follow-up “A Saucerful of Secrets” as a partner album while you discover this (it’s also the only album to feature both Barrett and Dave Gilmour by the way). Still, “Piper at the Gates of Dawn” stands the test of time not just as an icon of the band’s transition from singles and jazz clubs to epic rock, but also as a reminder of Syd Barrett’s flawed genius and as one of the greatest debut albums of all time.