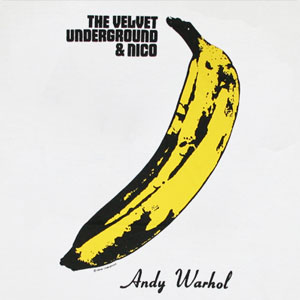 One of the hazards of working through this giant list of albums is that every now and then I come across albums that are SO classic, so demanding of reverence, that I feel like I’m just asking for trouble casting critical judgment over them. Like this one.

It took me much longer than it should have to discover the Velvet Underground. I’d never even heard of them before the BBC did “The Buddha of Suburbia”, my first introduction to “Heroin” was the Billy Idol cover on the awesomely terrible “Cyberpunk” album, and I think I first met “Venus in Furs” through a Michelin ad.

Still, we all make mistakes when we’re young. But even now, I can’t shake that feeling that I’m not quite getting it when it comes to the Velvet Underground and all the world of Nico and Warhol and Factory and NYC counterculture that grew up around this album. So when I listen to it, while I recognise the musical genius behind it, I’m still kind of faking it. You’ll have to bear with me.

Because I do love this album. And when I finally got round to listening to it properly for the first time, it was entrancing. And to my mind, it’s that gorgeous first track, “Sunday Morning” that got me.

It’s light, it’s happy and floating, it has a drifting music box feel that’s just captivating, and it’s an interesting counterpoint to what’s to come on the album. But even through that dreamy tinkling and Lou Reed’s soft vocal, there’s still that gritty lo-fi edge that defines the whole record. Belle and Sebastian apparently do a legendary live cover of this song (and let’s face it, they were born to play this song), but I couldn’t find a decent recording on YouTube, so here’s one I found of Beck’s far-too-brief Record Club project doing it.

“I’m Waiting for the Man” is arguably the quintessential Velvets track, a mix of lo-fi cacophony and drum mixed with Lou Reed’s lonely and sleazy story of waiting to score his next hit. Soulwax used that thundering chord and drum beat to genius effect, completely inverting its mood, on the brilliant “As Heard on Radio Soulwax Pt. 2.”, and there’s a bizarre Vanessa Paradis cover too if you’re bored.

The album’s called “The Velvet Underground and Nico”, and Nico finally gets her time to shine on “Femme Fatale”. It feels designed to contrast against the abrasive growl of the previous song and it’s beautifully gentle.

“Venus in Furs” envelops you when you listen to it; it’s almost undefinable as a song and it’s both haunting and immediately accessible. To quote Erich Kuersten, “There is no intro or buildup to the song; the track starts as if you opened a door to a decadent Marrakesh S&M opium den”. Once again, it jumps mood into “Run Run Run”, a more conventional rhythm and blues track that sings about NYCs junkie community and turns that lo-fi sound into its saviour. Lou Reed wrote it on an envelope in the back of a taxi apparently. Clever bastard.

Nico takes charge again for “All Tomorrow’s Parties”, a paean to Warhol’s Factory studio and the bizarre mix of characters that floated through. Again haunting and beautiful, it finishes of Side A in epic style.

“Heroin” is addictive. It’s just so wonderfully amoral and epic. It skips the bass guitar for a stripped down sound that shows Lou Reed’s brilliance and builds to a frantic beat that mimics that feel of “when I put a spike into my veins”. Gorgeous.

“There She Goes Again” once again leans on standard blues rock ideas, and sounds surprisingly similar to Lou Reed’s later “Vicious”. It’s a great song, but it’s buried under the weight of the mighty monoliths that make this album. Hard to fault it mind.

If the critics were right, and this albums stands as a counterpoint to the Californian optimism of the summer of love, then “I’ll be your Mirror” would be the track that winks at it the best. An impossibly hard trial for Nico to sing, she was driven to tears in the studio trying to get the gentle delicate vocal right. And she does – leaving us with a beautiful sweet track that may well be every new couple’s special personal song by law once I seize control of the state.

The last two tracks round off this exhaustingly powerful album nicely. The vicious electric viola and down tuned bass guitar don’t mess about – this is a dark, cruel and brutal freeform tonal poem about death, and it’s arguably the epitome of the low-fi growl that defines this album. By the time “European Son” comes around, you breathe a sigh of relief that you’re in more familiar rock territory (it’s almost Chuck Berry territory), but it’s only a couple of minutes until that breaks down and once again you’re falling into a hypnotic world of distortion, feedback and noise that is almost as unlistenable as it is brilliant.

But that’s this album really. It’s 49 minutes of intelligent, amoral, gritty and experimental rock, it’s an album that’s way bolder than you could ever imagine a successful debut to be, and it sounds as fresh as is it did 47 years ago. From an audio perspective, it’s a brutal listen – it’s not just lo-fi but it’s actually poorly mastered (listen to “Run Run Run” if you don’t believe me), but so what? It’s supposed to be. Listen and enjoy.