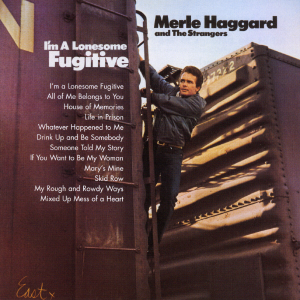 If Johnny Cash founded the link between country music and life behind bars, then Merle Haggard was right behind him – in fact it was as a convict in San Quentin that he first saw Cash perform in 1958, and his career burst to life in the sixties when America loved the badass counter-cultural idea of an ex-con behind the mike.

“I’m a Lonesome Fugitive” wasn’t Merle Haggard’s first album, and it certainly wasn’t his last. His most recent album was released in 2011 and he continues to tour. But this album did give him his first US country number one (with the title track), and it’s a skilled if modest album that, thanks to the success of the eponymous single, is one of his best remembered.

Three things make this album distinctive though. First is Haggard’s wise and melancholy songwriting, and the soulful themes that make up “Drink up and be Somebody” and “Someone told my story” come from a soul that’s been through the rough.

But Haggard also manages to bring it together with a gravelly Bakersfield voice and some really skilled guitar work, and there’s parts of this album where the latter really jumps out. In the overwhelming “Life in Prison”, the Chet Atkins-style steel guitar picking is stunning, an interesting silver lining for a bleak subject matter, an eloquent condemnation of the penal system that would work nicely as a B-side for “Folsom Prison Blues”. Apparently there’s a superb Byrds cover on “Sweetheart of the Rodeo” but I haven’t got to that one yet.

For an album so embedded in its honky tonk country roots, Haggard does get to play with other genres, most surprisingly with “If you want to be my woman” which is a dead ringer for soul classic “Can I get a witness?”. But then this is a diverse album with sweet songs like “Mary’s Mine” and “All of me belongs to you” rubbing shoulders with thrillers like “Mixed up mess of a heart” and the frantic and exciting “Skid Row” that, despite its sorrowful outlook, is catchy and upbeat (and fuck me that steel guitar picking is good).

In the years to come Merle Haggard would be a hero of both the countercultural scene and the “America fuck yeah!” crowd, and while his later hit “Okie from Muskogee” appears to be hippie-baiting satire, it’s done with a knowing wink to the flower power crowd, and The Grateful Dead liked it enough to cover it.

But all that was to come in a long and bountiful career. This album then, is just a snapshot of his roots, and while it’s not an epic, it’s warm and welcoming, and a thoroughly pleasant listen.