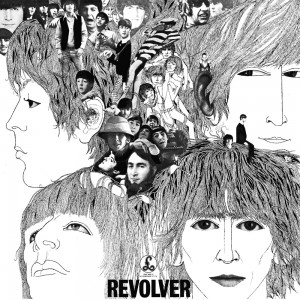 So, “Revolver”… this would be The Big Kahuna then? While most will talk about “Sgt. Pepper…” being the height of the Beatles’ catalogue, if you’re a serious muso type it needs to be “Revolver” – this is an album that’s been on its fair share of Greatest Albums top spots.

There’s no argument about the fact that it probably deserves it though. This is 40 minutes of superbly crafted pop music, and arguably the best that boys had done up until then (although, like I say, I prefer “Rubber Soul”).

It opens up with “Taxman”, and while there’s nothing quite as attractive as very rich rock stars complaining about money, this is quite a rocker, and as it was written in response to a 95% tax rate imposed by Harold Wilson’s government at the time, you can’t help but agree a little bit.

The classics continue with the wonderful “Eleanor Rigby”, perhaps the group’s first foray away from teen music to a family audience, and carry on with the dreamy “I’m only Sleeping”, Lennon’s great anthem for staying in bed (and not the druggy mischief that it was often interpreted as).

“Love you to” is perhaps the point where things really start to shift into a more experimental gear, with the sitar leading into something more akin to Indian classical music than rock.

I love “Here, There and Everywhere” – it’s beautiful, harmonic and one of Paul’s best, kindest melodies. Sometimes the strangely out of tune backing vocals distract, but then minus a subtle bass hook and a little string, all it has is those harmonies, Lennon loved it apparently.

Now I’m going to defend “Yellow Submarine” – firstly, it’s a track written for families, children. It’s sniffed at by aficionados as light and silly, but the truth is that every Beatles album needs a Ringo track or two to stop itself taking things too seriously, and despite the iffy movie that came out of it, it’s a classic that will be sung centuries from now. If you want a treat by the way, play the great orchestral version, “Yellow Submarine in Pepperland” on the Yellow Submarine album, and maybe at the same time read the Wikipedia entry on the bizarre political interpretations of the song.

“She Said She Said” plays as a smart little pop ditty but came from a bad acid trip with Peter Fonda and was one of the very few Beatles tracks that Paul wasn’t on.

The B-Side rocks on with the cheery “Good Day Sunshine”. It is, to me at least, the bit on this album which sounds most polished and professional, not the best track but certainly the best-produced.

“And your Bird Can Sing” was dismissed by Lennon and McCartney as fluff, but I like it. There’s a Byrds-esque guitar hook, upbeat lyrics and a fun pace and, well, I like it, so there. Mind you, I’ve probably got more plays out of the version on Anthology 2, where it’s got the extra treat of John and Paul giggling uncontrollably in the second verse.

Apart from making exceedingly good cakes, we can also thank Jane Asher for once again getting songwriting genius from Paul here on “For No One” – the lyrics are smart and poignant, and it’s a song that has accompanied me over the years when I’ve been pining over some random female (“Your day breaks, your mind aches, There will be times when all the things she said will fill your head, You won’t forget her” etc.).

“Doctor Robert” is a satire on the pill culture of the time, but it’s really about a New York doctor who liked to pep up his celeb clients with amphetamine-laced vitamin shots. It’s unremarkable in itself, although it’s got a nice fade out. “I Want to Tell You” feels like filler too (if there is such a thing on this tightly packed album).

“Got to Get You Into My Life” is far more likeable though – it mixes a brass band intro with Motown vocals and, in its latter half at least, screaming rock vocals that would be seen later more vividly on “Let it Be”.

“Tomorrow Never Knows” though, is the bit where it all changes – it’s got sitar, tape loops, vocal effects done through an over-complex revolving speaker unit and lyrics that really do turn off, relax and float downstream. Is it a declaration of a new direction? Is it pure completely mashed psychedelia? Doesn’t matter. It’s a song that you can rediscover every time you listen to it (I only just now noticed the piano at the very end of the song), and a dreamy sendoff to a remarkable album.