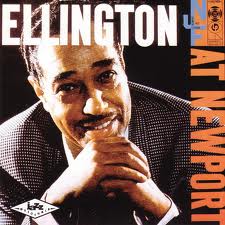 In fact, the first time I listened to this, I listened to the 1999 “Complete” Duke Ellington at Newport, a double CD’s worth of big band music that, while hardly bad, wasn’t for me. It was only then that I realised I was listening to a full-on extended bloat of an album, not the iconic original. Flip to the 1956 version, and what you’ve got is a nice concise snapshot of a man back in the spotlight after thirty years in the business, playing imaginative, astonishing trumpet jazz. And even a miserable jazz cynic like me couldn’t help enjoying the bluesy “Diminuendo and Crescendo in Blue”, featuring a great big behemoth of a sax solo that stands out against the best of any genre.

Oh, and apparently the “Live at Newport” thing was a bit of a loose title. They all went into a studio the Monday morning after to re-record it all because the original tapes were knackered. Even the applause was stuck on afterwards.