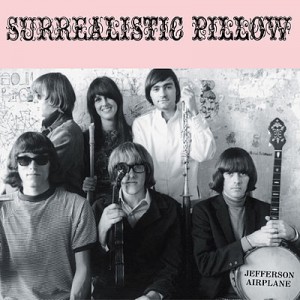 Jefferson Airplane always seemed to me to be the rock gods of the summer of love, and it’s about 49 seconds into the opening track “She has Funny Cars” that it becomes clear why, with Grace Slick’s soaring vocals bursting in, that same voice that would later define the epic “White Rabbit”. While “Surrealistic Pillow” was the second effort from the band, this was the first to feature Slick, and as can be seen in the in-your-face powerhouse “Somebody to Love”, it was an introduction that set the Airplane soaring.

Marty Balin takes back the vocals for the sweet and unassuming “My Best Friend”, as well as for the following tracks, the dreamlike “Today” and the heartfelt “Comin’ Back to Me”, before that beat comes back in full force for the fiery “3/5 of a mile in 10 seconds”, full of great guitar licks and a proto-blues pace – oh by the way, it’s 216 mph (I worked it out).
“DCBA” keeps the upbeat feel, and it sounds like a British invasion song until once again amazing Grace comes in and takes it all to a new ethereal level, and “How do you feel” is a pleasant but unremarkable harmony that’s a bit Mama’s and Papa’s. It’s then that things really pick up though.

I was first introduced to “Embryonic Journey” when it was on Bentley Rhythm Ace’s massively underrated FSUK*3 mix album, where it stood up as a nice acoustic beginning to the big beats mayhem that followed. There, as here, it couldn’t have been better named, a gentle acoustic interlude of amniotic bliss, placed cunningly right before things really get going.

To me, “White Rabbit” is the bollocks – it’s THE greatest track that sixties psychedelia had to offer. My dad introduced me to it when I was about 16, giving me advice that stands to this day (albeit paraphrased) – “If you haven’t heard this track at bowel-blistering volume, you haven’t lived”. It’s the quintessential hallucinogenic track, a bolero of Lewis Carroll imagery that builds to a fearful crescendo. It’s been covered countless times from artists as diverse as The Damned, Shakespeare’s Sister, My Morning Jacket and Patti Smith (I also found a dubstep cover on Spotify, but I won’t subject you to that).

I’m a big fan of the epic Emiliana Torrini version from the soundtrack to the otherwise disappointing “Sucker Punch” though.

Or if that’s not your thing, here’s a gorgeous (and totally different) George Benson cover too.

“Plastic Fantastic Lover”, which closes the album, feels out of place to be honest. It’s so Simon and Garfunkel in its sound it could have been slipped into “Bookends” without anyone noticing, but still, after a while the guitar gets you hooked.

It’s the same for the whole album really. It’s no secret that Grace Slick is the reason this album jumps out, but even in the more subdued folk-rock moments, there’s inviting creativity too. If this album is dominated by two or three standout tracks, then it’s a shame, because even in its more gentle moments, there’s still great things to discover.

And just to think, half of this lot would be singing “We Built this City” just a couple of decades later…