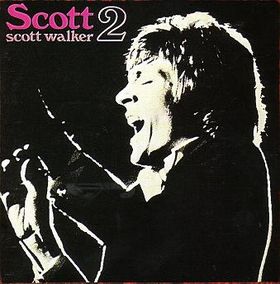 I discovered Scott Walker through a random Our Price bargain bin purchase of “Scott Walker sings Jacques Brel” back when I was editing a student magazine and didn’t have the money for such random purchases (much like now really). Sure, I’d heard The Walker Brothers before (“The Sun Ain’t Gonna Shine Anymore” still sends shivers through me) but as a solo artist he’d passed me by.

Still, I loved that album, played it to death, and my later nervous forays into his later stuff led me to the stunning 1995 album “Tilt” (shockingly absent from this list by the way) where that haunting voice mixes with thoroughly modern, caustic and actually kind of Nine-Inch-Nails-ish soundscapes.

But I digress. This album of course carries a few of the tracks that made it onto that Jacques Brel compilation. It opens with the electrifying “Jackie”, more recently made famous by the pretty-similar Marc Almond cover a few years later and settles into a mix of haunting ballads, melancholy and dry wit. Burt Bacharach cover “Best of Both Worlds” is the point on the album that sounds most like his Walker Brothers days, but it’s his cover of Tim Hardin’s “Black Sheep Boy” that stands out for me, deliciously epic with a humorous wink to the audience thrown in there too.

“The Amorous Humphrey Plugg” doesn’t make a big impression, but his first Brel cover, “Next” certainly does. Telling the tale of a teenage visit to an army brothel, it doesn’t fuck about. It hints at homosexuality and sexual abuse (in a not very PC kind of way), but it always amuses me. Kudos to Brel – not many songwriters would dare to pen lines like “I swear by the wet head of my first case of gonorrhoea”.

“The Girls from the Streets” is a more gentle companion track, but things start getting epic with “Plastic Palace People”, a good old-fashioned rock opera knees-up that still sounds amazing.

The rest of Side B is more subdued and arguably less memorable, although “Wait until Dark” and “Come Next Spring” show off his talented voice nicely. But it’s mainly his third Brel cover, the deliciously bitter “The Girls and the Dogs” that stands out here. Quite what it says about me I’d rather not say, but its jaded but witty view of romance and the fairer sex always makes me smirk.

One of the big ironies for me is that, for a man who was famously reclusive and shy with the public, Scott Walker is wildly upfront and bold in his songs and his vocals, and this album, while relatively mainstream compared to later works, is still a thrilling blast of energy. Parts of it have been described as over-the-top and schmaltzy, but while I can kind of see where they’re coming from, they also need to lighten up a bit. “Scott 2” is like a rich meal, sometimes a lot to digest but always more than satisfying to enjoy.