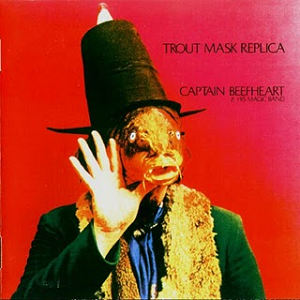 If there was a single album I’ve been fearing having to deal with in this lot, it’s “Trout Mask Replica”. I bought it on a whim, inspired mainly by lots of references to it in Robert Rankin’s books, and sat down to listen with an open mind, ready to be wowed.

What a load of shite.

This was basically unlistenable.

Over the years, “Trout Mask Replica” has become essentially a litmus test for musos – it sometimes feels like the prevailing opinion is that if you don’t get it, you might as well fuck off back to your Simply Red albums, and it’s thus a cue for your own inadequacy.

My train of thought tends to go like this – “surely they’re just pissing about in the studio? There’s no form, no running theme, no fucking harmony to this. If there’s greatness here, it’s lost on me. If I’m being generous, I’d begrudgingly acknowledge that he sounds like an energetic but menacing Howlin’ Wolf and that ‘Trout Mask Replica’ is a dadaist leviathan that’s got the form (or lack thereof) of free jazz, but that’s about all I can say for it.”

Except… Except I did a pretty good job of oh so cleverly and casually dismissing Frank Zappa a couple of reviews back and maybe there’s no win in doing it again here. Then I read this excellent piece by John Harris in The Guardian about his failings with “Trout Mask Replica” and it made me think, there’s a challenge here for me.

So here it is, before I get too sanctimonious about this album, I’m going to follow John Harris’s lead and keep going with it. It’s going to take time, but I’m going to listen to this album at least ten times before returning to review it again. I’ll do other reviews in the mean time, and I suspect that by the seventh listen I’ll be writing about how the wife kicked me out of the house, but god damnit, I’m going to ‘get’ “Trout Mask Replica” eventually…