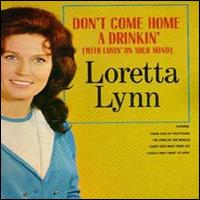 Despite the slightly comical Nashville-esque title, it’s hard not to like this offering from country legend Loretta Lynn. This, her seventh album, does lean on cover versions for most of its 30 minutes, but when she puts pen to paper it shines out from the herd and she does manage to bring character to each song even when it’s someone else’s.

It kicks off with the title track, which despite it’s vaguely humorous name and upbeat sound, deals with the serious and dark subject of acquaintance rape. She sings defiantly and honestly, and it’s something to behold, outspoken and uncompromising. It’s a trend she keeps up for much of the album, from heartfelt ballads like “I really don’t wanna know” and “There goes my everything” to foot tappers like “The shoes goes on the other foot tonight” and “The devil gets his dues”.

There would be other artists to come that imitated Lynn’s forthright and proto-feminist lyrical honesty, and her own career would stretch out for more than 70 albums all the way to the present day, as well as a biographical movie and a Presidential Medal of Freedom, but this is the sound of a younger, less confident artist who still manages to shake the house with her big round hairy lady-cojones, and as a lesson in songwriting with your heart on your sleeve, it’s an admirable listen.