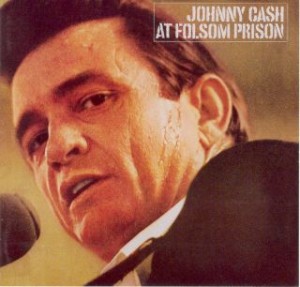 There was a period in about 2006 when I was massively into Johnny Cash. Maybe it was hearing his “American Recordings” collaborations with Rick Rubin, laying “The Man Comes Around” relentlessly (that song kicks ass), or maybe it was watching “Walk the Line” with the missus, back in the spawnless days when we could imagine going to the cinema, but he got played endlessly.

Which of course, was when I discovered this album. Cash had got into the habit of playing prisons throughout the sixties, but the idea of upping the scale and creating an album from one of his performances was a crazy notion, particularly with his career on the wane since his peak in the fifties. But things were starting to turn around for Cash, and when he convinced Columbia Records’ new Head of Production Bob Johnston to put on a monster concert with Carl Perkins and The Statler Brothers at Folsom Prison (where else?), he managed to create one of the highlights of his career, and a truly ace live album.

“I just wanted to tell you this show is being recorded for an album release on Columbia Records and you can’t say hell or shit or anything like that.”

Playing in front of 2,000 inmates, he kicks off, obviously, with “Folsom Prison Blues”, his first big hit from way back in 1955, that wonderfully badass track where he “shot a man in Reno just to watch him die”, and follows it up with heartfelt songs about life behind the jailhouse walls, ranging from the bleakness of “Dark of the Dungeon” to folky ballads like “The Wall” and the pathos of “The Green Green Grass of Home”. What you’re listening to is a man who empathises with his audience, and who isn’t afraid to push the limit a little bit – he certainly walks the line* with “Cocaine Blues” and lines like “Well I laughed in his face and I spit in his (the sheriff’s) eye” in “25 minutes to go”. But the mood stays warm throughout, and when he sings the desperately tongue-in-cheek ballad “Flushed From The Bathroom Of Your Heart” before bringing on June Carter for a rapturous rendition of “Jackson”, you’ll be grinning along with the crowd.

Cash would revisit the prison concert album soon after with “Live at San Quentin” but this is a wonderful moment from an artist back on top of his game. A joy to listen to.

* pun totally intended by the way.