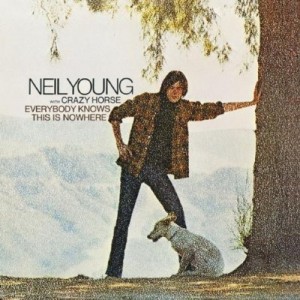 I grew up knowing about Neil Young more by reputation than by actually hearing any of his stuff. In my college days of Nirvana, Pearl Jam and reading the NME and the Melody Maker every Wednesday, Young was the mythical ‘godfather of grunge’, master of growling guitars and growling vocals, revered by the music press. But for years, I never actually listened to him.

It was in one of my bored moments working for a London dotcom that I Napsterised ‘Cinnamon Girl’ and ‘The Needle and the Damage Done’, and the image that I’d built was shattered. His vocals are haunting and gentle, the music is surely country rock, not “Scentless Apprentice”. Even later when I bought “After the Goldrush” in a Saturday CD binge, it slipped by me.

For this, his second album, maybe the answer is a little bit clearer. It’s taken me a few listens to really get my chops into (hence the lack of posts of late), but while the tracks on it feel warm but safe, once you pay attention there’s really more going on.

The first couple of tracks, “Cinammon Girl” and the title track, are harmonic and catchy, a trend that continues with the Byrds-like “Round and Round” and “Down by the River”, but once you start really listening, you realise that the crunch is actually making jagged, edgy guitar riffs part of a warm bubble of melody – this is rough music made smooth.

As it goes on, it gets braver and more soulful, with the second half combining troubled lyrics with stunning bluesy guitar, but never loses that essence of down-to-earth warm accessibility. It’s not a spectacular album – there’s not been any tracks on here I’ve seized for my monthly playlists, but it’s a talented piece of work, and as an invitation to a bold career musician, it certainly hits the right buttons.