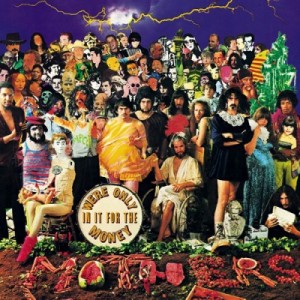 Who listens to Frank Zappa? Seriously? Who is it that decides to set the mood for a quiet night in with this stuff? Or maybe slip it on their iPhone for a good gym workout?

I mean, I’m open to stuff but there’s clearly this hole where Zappa and Captain Beefheart live, completely baked, creating albums like this and cunningly evading my musical radar.

“We’re Only in it for The Money” has been described as ‘the best concept album ever’ and a milestone of music in the 20th century. It’s satirical and mischievous in parts (“Flower Punk” and “Who Needs the Peace Corps?” are worth a smile), but it’s mostly a boiling enema of backmasking, distortion and studio fuckery that’s basically unlistenable.

Greatest concept album ever? Bollocks to this, I’m going to play “Slippery when Wet” for a bit.