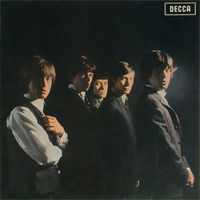 One thing that’s struck me recently, listening to The Beatles’ “Please Please Me” is how much it DOESN’T sound unsure of itself. Yes, it’s filled with cover versions, but it’s more confident and produced than you’d actually expect from a debut album.

I mention it now because you could debate whether the same is true for this album. Like “PPM”, it’s the first album from a band that… well, let’s not bother with superlatives, it’s The Rolling Fucking Stones. Like “PPM” it’s rich in 50’s blues covers and stands out more for the fresh familiarity of the guys singing it than the material itself. And most importantly, like “PPM” it would be quickly overshadowed by much greater stuff in a matter of months.

Still, this is a great listen. From the opening “Not Fade Away”, which seems to finish so quickly I briefly wondered if I’d accidentally skipped forward, past fired-up covers like “Carol” and a thrillingly high tempo “I just want to make love to you”, through to the downright filthy “I’m a King Bee”, this is an album that doesn’t let up for a second.

End of the day, it’s a Stones album. Maybe it’s not an album from a band of confident songwriters (the original compositions “Now I’ve got a Witness” and “Little by Little” are not only derivative but relatively uninspiring), but it’s a massively exciting snapshot of an arrogant, sexy and daring rock sensation in the making.