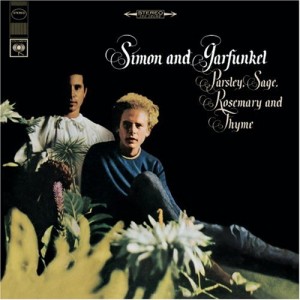 OK, so praising all the Elizabethan ambience of this albums’ eponymous first track might seem a bit churlish given how bitchy I was about “Lady Jane” on my last review, but the truth is I’ve always been a bit fond of it, and as an opener to a wonderfully mellow (if a little short) album, it’s a winner.

But then I’ve always been a sucker for Simon and Garfunkel. Maybe it’s the fact I grew up with them on the stereo, maybe it’s just the fact that they’re not easy to hate. But while I’ve played “Bridge over Troubled Water” and “Bookends” to death, this album was one that I never really got the hang of until now.

It’s a young album, part of a songwriting team that wasn’t quite in focus as it would later be, but it’s in another league from its patchy predecessor “The Sounds of Silence”, which, apart from the title track and the wonderful “I am a Rock” never really found its feet.

“Parsley, Sage, Rosemary and Thyme” though, does. Each track is intelligent and unique. True, some tracks blend into the background, like “Patterns” and “Cloudy” and it occasionally gets lost – “The Dangling Conversation”, while reminiscent of “America”, is awkward, and the line “You’ll read your Emily Dickinson and me my Robert Frost” is just a little embarrassingly hipster-posing. But there are so many gems on here that you’ll forgive it.

“The Big Bright Green Pleasure Machine” and “The 59th Street Bridge Song (feelin’ Groovy)” are joyously hippified (the latter almost comically so to modern ears). “A Simple Desultory Phillipic…” is Dylanesque, frenetic and ingenious (try not to grin at “I’ve been Roy Hallied and Art Garfunkled”).

There’s two standout tracks, for me at least. “Homeward Bound” is magnificent in its ennui and whimsy. It’s been called the greatest song ever written about life on the road, and it’s lonely yet joyful (quite an achievement considering it was written at Widnes Railway station trivia fans).

But it’s the last track, “Silent Night/ 7 o’ clock News” that gets me every time. It’s a haunting rendition of  the hymn over an ominous news report checking serial killers, Lenny Bruce’s death, escalation in Vietnam and a world tearing itself apart. It’s a menacing yet serene mix that just makes your heart plead for it all to be calm and silent.

Sadly, at 28 minutes and 30 seconds, that (sound of) silence comes to this album far too quickly, but it remains not just a wonderful bit of sixties beauty but a testament to the awesomeness of Paul Simon as a songwriter.